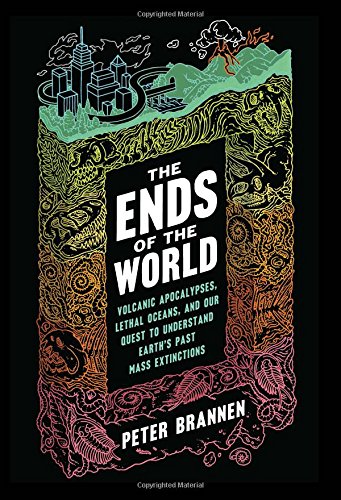 Five times during the existence of planet Earth, all life upon it was nearly snuffed out in what scientists call “End Mass Extinctions.” What our planet went through is mind-boggling—consider the Decca Traps of 100 million years ago when half of India was buried under molten lava two miles deep! Peter Brannen, a science journalist, has accomplished a remarkable feat in his new book, The Ends of the World: Volcanic Apocalypses, Lethal Oceans, and Our Quest to Understand Earth’s Mass Extinctions: he has make geology fascinating. Subject matter had a lot to do with it—with Earth under assault from itself and the rest of the universe—but his writing is lively, charming, and often humorous, sometimes profane. But it all works, and this is a great science book that will let you know if you’re going to be obliterated by nature next week during our Sixth Extinction. And Peter Brannen–he’s not a gloom and doom kinda guy.