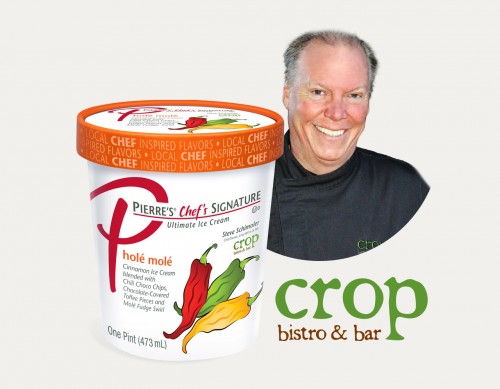 The first time I tasted ice cream with chiles in it was at the Fiesta de Los Chiles in Tucson in 1988. The recipe was simple: green chiltepins in escabeche added to vanilla ice cream. It was astonishingly good, and the casein in the ice cream brought the capsaicin in the chiltepins under control–they can get  to 100,000 Scoville Heat Units. In South Africa a few years ago, I tried Nando’s Per-Peri hot sauce on chocolate ice cream and it was delicious too. But these days, the idea is getting quite sophisticated. Pictured above is a unique chile-flavored ice cream from Pierre’s Ice Cream Company in Cleveland. It’s called Pierre’s Holé Molé, which is a dust-up of a name because of “holé” rather than “holy” and “molé” rather than simply “mole.” The word does not have an acute accent. Anyway, the ice cream was developed by chef Steve Schimoler of Crop restaurants and it’s a cinnamon ice cream with chile chocolate chips, chocolate-covered toffee pieces, and a mole fudge swirl. Sounds delicious. If you’re interested in spicy ice cream, try the recipe below.

Ice cream with hot sauce is all the rage in both South Africa and the U.S.

Preheat the oven to 350°F.
In a bowl, combine the pears, maple syrup, balsamic vinegar, butter, and chile and toss to coat. Spread the mixture on a baking pan and roast for 20 minutes. Allow to cool. When cool, add individual bowls
Heat the milk, whisky, and Nando’s Peri Peri sauce in a saucepan over a medium heat until small bubbles form around the rim of the milk. Cool slightly
In a bowl whisk the egg yolks and sugar together until combined. While whisking, strain the milk mixture into the eggs. Pour the mixture into the saucepan and return to the heat.
Heat the mixture over a low heat until it forms a thick custard, stirring constantly.
Strain the mixture into a bowl and stir in the cream. Allow the mixture to cool.
Freeze the mixture in an ice cream machine following the manufacturer’s directions until it freezes. Serve the ice cream over the pear mixture.
Yield: 1 quart
Heat Scale: Mild

Can You Barbecue Ice Cream?