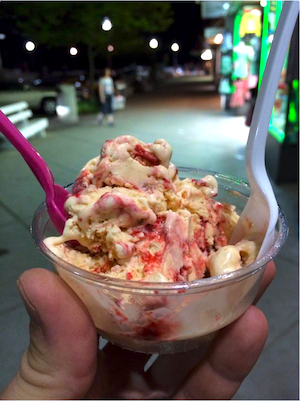 My friend Chip Hearn, owner of Peppers.com and a fellow inductee into the Hot Sauce Hall of Fame, is making customers sign a release before he’ll serve them his Ghost Pepper Ice Cream at his Ice Cream Shop in Rehobeth Beach, Delaware. He’s owned that store for 45 years and he doesn’t want to hurt anyone. No under the age of 18, or over the age of 65 is permitted to even sample the dessert. Pregnant women, lactating mothers, or men with erectile dysfunction are banned from eating it. Anyone with heart ailments, vascular problems, respiratory problems, back problems, vision problems, high blood pressure, sinus conditions, digestive problems, circulation problems, immune problems, neurological or problems with authority should not taste this product!” the waiver warns. “They’re tasting it and they’re talking about it. That’s the game,” Hearn said, and they serve it 200 times a day in the summer. The sweet heat confection begins with the shop’s signature African vanilla ice cream, ribboned with strawberry sauce, and flavored with several hot sauces and “Bhut Jolokia,” or Ghost Peppers–one of the world’s hottest peppers, measuring in at 1 million Scoville units. For Chip, the whole Ghost Pepper ice cream experience isn’t just for the shock value. He claims it really brings people together all in the name of good fun. “It’s not just one person tasting something, it’s the whole family getting together watching dad.” Yeah, watching dad writhe in agony after collapsing on the beach. 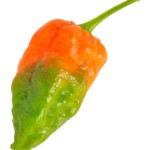 I’m Inducted Into the Hot Sauce Hall of Fame

Mulching and Irrigating the Pepper Garden