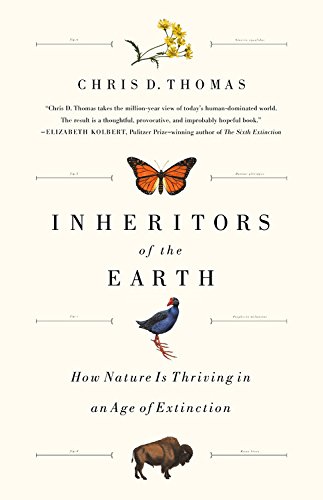 Chris D. Thomas believes that if Planet Earth could survive the asteroid that killed all the dinosaurs, it can handle all the damage being done to it by humans. In his new book Inheritors of the Earth: How Nature is Thriving in an Age of Extinction, Thomas, citing numerous scientific studies, postulates that the number of plant and animal species is actually increasing. Of course, the climate change deniers disagree. Climate change denial is part of the global warming controversy. It involves denial, dismissal, unwarranted doubt or contrarian views contradicting the scientific opinion on climate change, including the extent to which it is caused by humans, its impacts on nature and human society, or the potential of adaptation to global warming by human actions. Some deniers do endorse the term, but others often prefer the term “climate change skepticism.”

Thomas writes that more new plant species have come into existence in Britain during the past three hundred years than have gone extinct, and his writing has generated yet a third group of protestors he calls “gloom-merchants.” One of them reviewed his book on Amazon, commenting, “This is the kind of insanity that you expect to hear from environmental apologists who want you to believe that climate change isn’t really a bad thing. But it’s a lie.” But Thomas is no apologist—he says many times that climate change is not a good thing but that it has scientific repercussions that we did not expect, like the development of new species to fill extinction niches caused by climate change. Thomas is a professor of conservation biology at the University of York and one of the most renowned ecologists in the world. He accuses the “gloom-merchants” of focusing solely on the losses of plant and animal species while ignoring evolutionary acceleration that is creating new species much faster than before. Rather than climate change causing the “sixth extinction,” Thomas writes that “Once these new species have evolved into increasingly distinct forms, the advent of humans could be seen to have substantially increased the biological diversity of the Earth. A sixth genesis.”

I recommend this book highly and I learned a lot from it. As a positive reviewer put it, “I was thrilled to see a title that might offer hope amidst the gloom of extinctions (As I write this, the common bumblebee has just made the Endangered Species List). Chris Thomas is an environmental scientist, and his claims are evidence-based.”