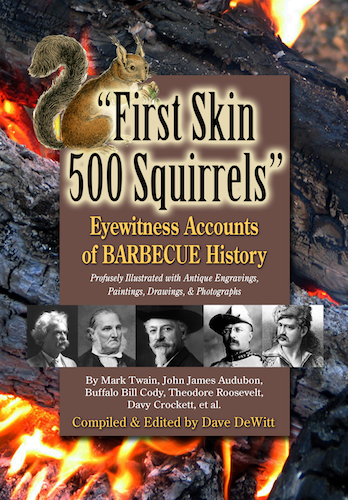 Our company is expanding into publishing. Sunbelt Shows, Inc., in business since 1990 and producers of the National Fiery Foods & Barbecue Show and the Scovie Awards Competition, has a new division, Sunbelt Editions, which will publish my new books and also books by other authors. One of our new books, which will debut at the Fiery Foods Show March 2-4, is First Skin 500 Squirrels: Eyewitness Accounts of Barbecue History. Here’s our promotional copy for the book: 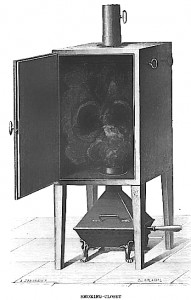 Food historian Dave DeWitt has searched obscure books and magazines to uncover the story of BBQ that most people don’t know about. Like how advanced smoking meat was in France, the barbecue that inspired Buffalo Bill, Audubon’s portrayal of a barbecue as courtly love, humorous tales of ‘Q from 30 U.S. states, a history of Jamaica’s jerk pork, and a wealth of trivia and techniques over the years.  “The quirky world of barbecue is getting washed into the mainstream a lot these days, and this book will make it a little easier for us all to hold on to the authentic beginnings.” –Ray Lampe, Dr. BBQ, 2014 inductee into the Barbecue Hall of Fame.

“A delightful and detailed chronicle of the history of barbecue that involves Bowie knives, a Lewis & Clark salmon bake, “smoaked” brisket, the beginnings of jerk pork, dismembered buccaneers, two fat beeves roasted whole, mutton munchers, and an enlightening look at BBQ state-by-state in the early days of this country. Priceless reading!” –Rick Browne, host of “Barbecue America” for seven years on PBS and author of sixteen books on BBQ.