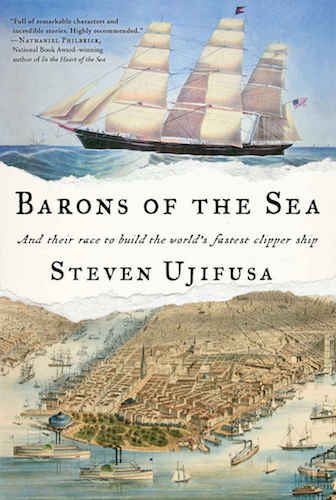 Quick now, answer this one. Which sail is the first one on a clipper ship: the flying jib or fore topmast staysail? The correct answer is the flying jib, which is followed by the outer jib and then the inner jib, and then the fore topmast staysail. How do I know this? Because I have a copy of Barons of the Sea, and its appendix has a diagram of every single sail on a clipper ship—a confusing twenty-four of them. That’s an indication of how complete and well-researched this history is. It tells the story of how American clipper ships—the fastest ships on the ocean—made obscenely huge fortunes for their owners using money from the opium trade to buy luxury goods in China—silks, teas, and porcelain—and sell them in America. These were the barons of the sea, who were initially wealthier than the railroad, oil, and steel barons. So this splendid book weaves together the building of the fastest ships with the China goods, the California gold rush, and the growing wealth of Americans into a fascinating—but short-lived—fabric of trading that most people are unfamiliar with. Loaded with great stories of the dangers of life on the seas and the enormous fortunes that seemed to justify the risks taken, plus insights into the lives of the men and women taking those risks, this book has it all. It’s both highly entertaining and highly recommended.

Review of The Secret Token