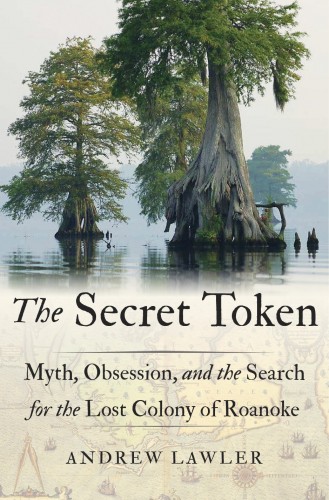 Note to the readers of this review: there is a spoiler implanted here. Note to the author, Andrew Lawler: Readers, even readers with a love of history and mystery, get tired of dead ends. And this is what every lead in this story ends up in: a dead end. Every attempt at solving this purported mystery—and every possible solution—is debunked, which makes me conclude that there is no real mystery at all, just a theoretical mystery that’s been kept alive through mythology, faked history, and fanatics. When the governor of the second batch of colonists at the colony of Roanoke, John White, left the colony in 1587 to supervise a resupply mission in England, the country was being threatened by Spanish Armada, and he was forbidden to return to the colony until 1590. When he got there, there was no sign of the colonists, which led to the idea that they were lost. Many archaeological digs over the centuries revealed no burials and no significant artifacts. After reading 328 pages of dead ends, Lawler writes: “Most historians now accept that the Lost Colonists, if they survived, merged with indigenous society.” Michael Oberg, a historian at the State University of New York at Geneseo, adds, “Raleigh’s colonists were lost only to those Europeans who searched and failed to find them. Indian people knew what happened to them.” He concludes that “they became Algonquinians and were no longer English men and women.” If this conclusion had been written 328 pages earlier, I would not have read this book. As it is, the book was interesting enough for me to finish it, but just barely. There is way too much padding of the “mysteries” and the numerous theories. For example, could DNA tests help solve the mystery of what happened to the “lost” colonists? Lawler spends dozens and dozens of pages on this subject only to conclude that the answer to that question is “No.” So why even bring it up in the first place? This book is quite disappointing, but the cover is gorgeous.