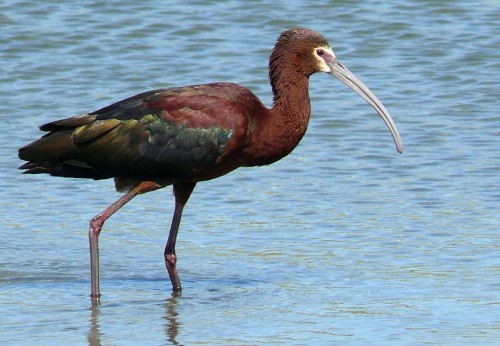 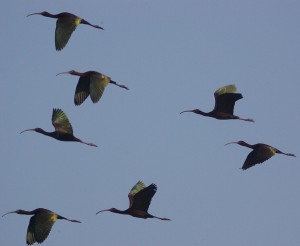 The month has just begun, and the three ibises I saw this morning were a great start as they are uncommon and I only see them every two or three years. It is possible that I saw the glossy ibis–they look identical except the whiteface’s eyes are surrounded by white feathers. I was approximately a hundred yards from the small flock, so I couldn’t tell. The birds are about two feet long with a three-foot wingspread. They eat insects, snails, fish, crayfish, and frogs. This species breeds colonially in marshes, usually nesting in bushes or low trees. Its breeding range extends from the western United States south through Mexico, as well as from southeastern Brazil and southeastern Bolivia south to central Argentina, and along the coast of central Chile. These birds are closely related to the Sacred Ibis (Threskionis aethiopicus) that once lived in Egypt and is depicted in many ancient Egyptian wall murals and sculptures. It is also found as mummified specimens at many burial sites and played a significant religious role, in particular during the Late and Ptolemaic periods. The ibis represented the god Thoth, god of wisdom, knowledge and writing, and was considered the herald of the Nile flooding.