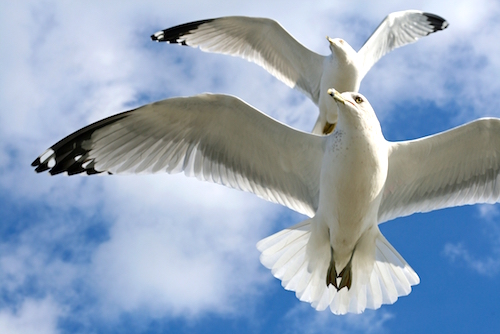 These are ring-billed gulls, also known as Chesapeake Bay gulls. There is a black band near the end of the yellow bill that encircles it. I’ve only seen this bird three times in thirty-some years, so it’s a rare treat. It’s occurrence in the middle of the upper Chihuahuan desert is a result of the Rio Grande flyway. So they migrate through Albuquerque in the winter but do not nest here. The ring-billed gulls literally migrate all over the U.S. and they are more common inland that on the coasts. Like crows, gulls are omnivorous and will eat just about anything that’s digestible, and they are often seen on piles of refuse on landfills. Like bald eagles, they will scavenge dead fish and other carrion. Their enemies are sharks and octopuses, so they’re pretty safe here in the South Valley.