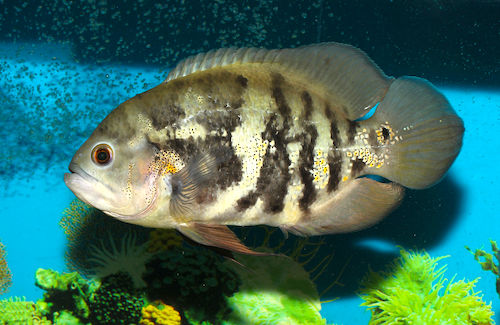 In late 1973, when I lived in Richmond, I decided to install a 40-gallon aquarium in the house I lived in with my former wife, Luci. I populated the tank with a variety of colorful species but did not research the fish. I had no idea what I was doing. One of those fish was Astronotus ocellatus, the common Oscar, which looked like the one pictured above. One by one, the other fish in the tank began disappearing, and the Oscar, which I cleverly named “Oscar,” was getting bigger by the week. Finally, I noticed that Oscar was the only fish in the tank, so I had to resort to buying goldfish to feed him. By now, Oscar was about five inches long and I began to notice his unusual behavior–he was showing off for me. Whenever I came near the tank, he would turn on his side, dive down to the gravel, and rub his side on it. Then he would move to the top of the tank, still on his side, and swim in circles. If I put my fingers in the tank, he would assume the normal fish position and rub his head against my fingers like a cat or dog does when it wants attention. Luci and I decided to move to Albuquerque and I drove a large U-Haul truck.  On the seat beside me was a large, shallow, styrofoam container for Oscar with an aerator so that he always had plenty of oxygen. I also put in a fish tank heater that ran off the cigarette lighter so the water temp was always more that 70F. We drove for 2,000 miles that way and Oscar was fine. I set up the tank in the townhouse we moved into and noticed that when I brought goldfish home, Oscar would see the plastic bag with the goldfish from across the room and would get excited, doing his greeting flop even faster, and coming to the top of the tank and sticking his nose out of the water–he was begging to be fed. I had exactly the same feelings for him that I had for the cats–he was my pet, only with scales instead of fur. This went on for months and ended one weekend when Luci and I went out of town. While we were gone, the power went out, no more heater, and Oscar died when the water got too cold. I was sad and buried Oscar in the garden, sold my aquarium, and never had fish again. I was reminded of the Oscar incident when I read two great books about fish, What a Fish Knows, by Jonathan Balcombe and The Eye of the Shoal, by Helen Scales. Both of these books have stories of fishes bonding with humans and other revealing facts that I never knew about fish. Many divers know of this phenomenon and have fish pets that they name, play with, and feed–in the wild, under water. Some are even small sharks. All this has taught me to never underestimate the intelligence of the so-called “lesser creatures.”

Review of Eye of the Shoal