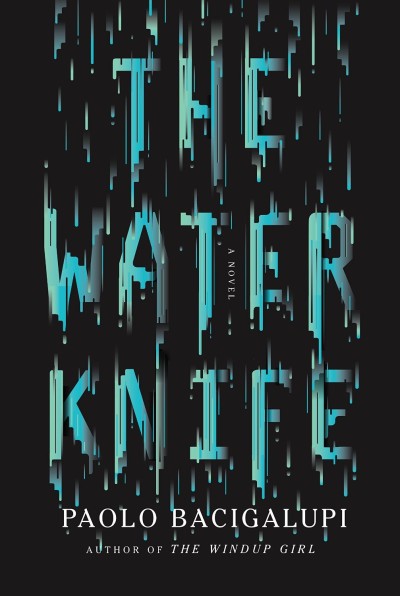 This is the right thriller at the right time, considering the severe drought that has gripped the western U.S. for the last few years. In the near future, author Paolo Bacigalupi envisions a weakened U.S. government that cannot prevent western states from closing their borders, organizing militias to prevent illegal immigration, water that is far more valuable than gold, and shadowy water control organizations like the Southern Nevada Water Authority. Fighting for control of the Colorado River, the SNWA hires operatives like Angel Velasquez, a “water knife” who, through assassinations and terrorism, fights off agents from Cali (California) and “Zoners,” illegal immigrants and spies from Arizona. The story is cleverly told from three points of view, the water knife, a Pulitzer Prize-winning journalist, and a teenage illegal immigrant from Texas who’s just trying to survive in the rubble of what’s left of Phoenix by selling water and her own body. This is heady stuff, the action is violent and very cinematic, and I enjoyed it despite a hole in the plot large enough to drive a giant water truck through. I’ve read most of the major reviews of this book, and so far not a single reviewer has noticed this hole. If water is the most valuable commodity in the U.S., and billions upon billions of dollars are at stake, why didn’t Mr. Bacigalupi bring ocean desalination plants into the plot? Despite being quite expensive today to build and operate, they would seem to be the solution to the massive water shortages that plague the west in this book. I mean, if water can be shipped from Colorado to California and Arizona, why not send it the other way? I’m giving this book a B- because of this plot fault, but concede that the author could work it into a sequel. Still, I enjoyed this thriller sci-fi hybrid and admire the author’s originality.