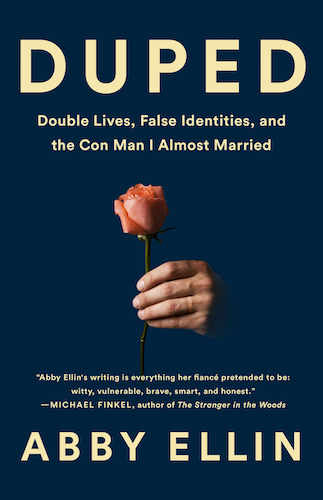 On Saturday, I celebrated my 75th birthday and one of the presents Mary Jane gave me was this book by Abby Ellin, and it was so interesting that I read it in a few hours (it’s only 221 pages of text). The subtitle is “Double Lives, False Identities, and the Con Man I Almost Married.” The Commander, as she refers to her fiance, was more of a compulsive liar that a real conman trying to extract money from her–he was not doing that but rather indulging in fantasies through his false identities. He worked for the Navy at the Pentagon but told Abby that he was a special operative, and that was the reason for his unexplained absences–he was on assignment and out of the country. Abby broke up with him and used her experience as a launchpad for her research on liars of all kinds

The topic resonated with me because I was once married (for less than a year) to a compulsive liar. In retrospect, I believe that she suffered from Borderline Personality Disorder but didn’t know it and neither did I. So she probably wasn’t deliberately lying but couldn’t help herself because of her disorder. Still, the lying and her wild emotional swings made her impossible to live with and we divorced. I never saw her again and it’s been more that thirty years. Even her son, who I’m very close to, has no idea of where she is or what happened to her. Her lies were sometimes spontaneous and sometimes calculating, but usually absurd. For example, during a therapy session she told the therapist that every night I went to bars, got drunk, and came home and beat her. There was no evidence to support any of these absurd claims, and I brought up the fact that I had never been arrested, no restraining orders against me, and there were no marks on her body indicating any harm. It didn’t matter. The therapist believed her.

Back to the book. Although Ms. Ellis doesn’t cover lying as a consequence of disease, she does a good job of analyzing other types of liars and their motivations. I recommend the book.