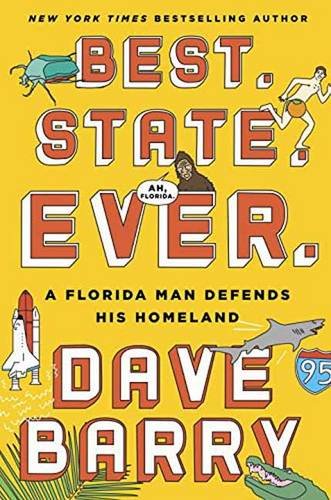 Dave Barry is the second funniest writer ever born in America; in first place, of course, is Mark Twain. Barry’s new book, Best. State. Ever., is the second book published this year about the absurdities that abound in the state of Florida. The first one, Oh, Florida, I reviewed here. The subtitle of Barry’s Florida book is “A Florida Man Defends His Homeland,” and most of his defense consists of reminding us that most–if not all–of the people doing stupid things in that state were not born in Florida, they moved there from some other state. “More than 1,000 people move to Florida every day,” he points out. This book is very funny, with literally a chuckle every page and something laugh-out-loud funny every four pages. So, for $27 for this hardcover you get 229 chuckles and you laugh out loud 57 times. I conclude from this analysis that the book is worth every penny I paid for it, and I didn’t pay $27 for it because it was discounted 30% at Barnes and Noble.
He can’t cover every absurd thing in Florida–the book would then be 2,000 pages long, minimum. So, after a “Brief History of Florida,” where we learn that “Anytime Florida gets too exciting for you, you can just wade out into the Everglades and stand around up to your thighs in muck and swat mosquitoes until you have calmed down sufficiently. At which point you will be eaten by a python,” he takes us on a tour of his favorite wacky places that include Frog City, home of the Skunk Ape Research Headquarters; Weeki Wachee with its Underwater Mermaid Theatre; Spongearama, where he buys his wife the “Cadillac of natural sponges,” the wood sponge. “I am confident that my wife will be thrilled,” he writes. “The ladies love a romantic gesture.” Then it’s on to the Cassadaga Spiritualist Camp with the mediums on one side of town and the psychics on the other; and then on to The Villages, the world’s largest retirement community with a population of 115,000 and they all drive golf carts. I’m not making this up. Gatorland is next, and Barry notes “This is the place to go if you want to observe alligators going about their normal daily alligator routine of not moving for hours on end.” In Miami Beach, Barry and his wife Michelle manage to get into the hottest nightclub in Florida, LIV, where they are the oldest people there and they drink rum and cokes in plastic glasses costing $20 each. The book concludes in the wackiest place in the state, which of course is Key West, where every bar has a Jimmy Buffett impersonator and several of the bars are “Clothing Optional.” In conclusion, if you like the “Florida Man” headlines like “Florida Man Shoots Sister in Butt with BB Gun Because She Gave Him Penis-shaped Birthday Cake,” you will love this book.