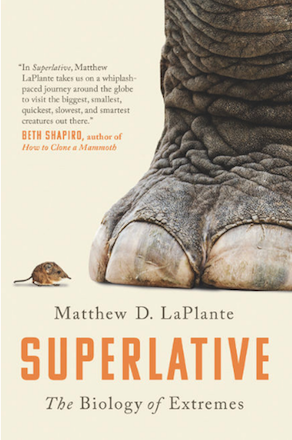 If I could, I would nominate this book for Best Science Book of 2019 even though the year is not even half over and Superlative was not written by a scientist but rather by an associate professor of journalism. It’s that good. Matthew La Plante takes on a tour of the world of plants, animals, insects and other strange creatures to find the fastest, the largest, the deadliest, the smartest—the things at the extremes of life. Not only are the stories fascinating, the results are totally unexpected. The fastest fish in the sea? Not the sailfish, which held the supposed record of 68 miles an hour. The University of Massachusetts Large Pelagics Research Center, the—“Tuna Lab”—clocked an Atlantic bluefin tuna that was much faster. In brief spurts, the tuna can reach 144 miles an hour in a medium that’s roughly 800 times denser than air.

LaPlante has dozens of examples like that which totally boggle the mind. His chapter subtitles are intriguing, too. like “Why almost everything we know about giraffes is wrong;” “How the world’s oldest known animal is helping us unlock the ocean’s darkest secrets;” and “Why the world’s most poisonous frogs don’t poison themselves.”

What is the most cancer-resistant animal? Either the elephant or the elephant shark. I could go on like this forever, but why bother? Just buy the book. If you like science, you won’t be disappointed, I promise.