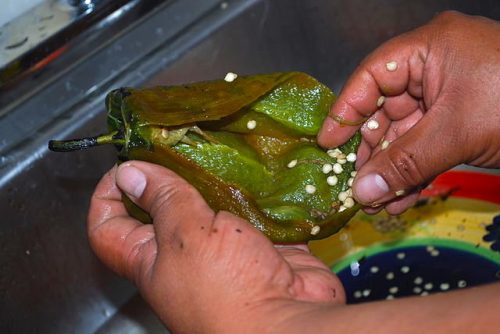 Not many people know that I’m an associate professor on the adjunct faculty of New Mexico State University, in the College of Agricultural, Consumer, and Environmental Sciences. Here’s some recent chile pepper news that my chile-loving readers will like

Treating inflammation in livestock by supplementing their diet with capsaicin-rich chile peppers. Using industrial hemp to suppress the growth of weeds and soil-borne pathogens. These are potential examples of value-added agriculture that may become a reality as the College of Agricultural, Environmental and Consumer Sciences at New Mexico State University works to develop a Center of Excellence on Sustainable Food and Agricultural Systems at NMSU.

Clint Löest, animal nutritionist and professor of animal and range sciences, and his graduate students are exploring an alternative strategy to improve livestock health. Each year, diseases in cattle cost the beef industry in the United States an estimated $600 million, and there’s growing pressure from consumers to minimize drug use with alternative methods. Their research involves evaluating the efficacy of chile pepper capsaicin as an anti-inflammatory for livestock.

“If capsaicin is effective at reducing inflammation,” Löest said, “then supplementing livestock diets with chile peppers could reduce traditional anti-inflammatory drug use and increase the market for culled chile peppers by $10 million annually, a win-win situation for the chile pepper and livestock industries.”

Chile pepper byproducts, such as culled pods, peels, veins, leaves, seeds and stalks, offer many benefits. They’re highly nutritious, containing more protein and minerals than corn silage, a major source of feed for dairy cattle in New Mexico, and they’re widely available at little to no cost. Nationwide, the process of peeling, deseeding and deveining chile peppers yields more than 30 million pounds of byproducts every year.

A Chile Pepper Mercado in Oaxaca