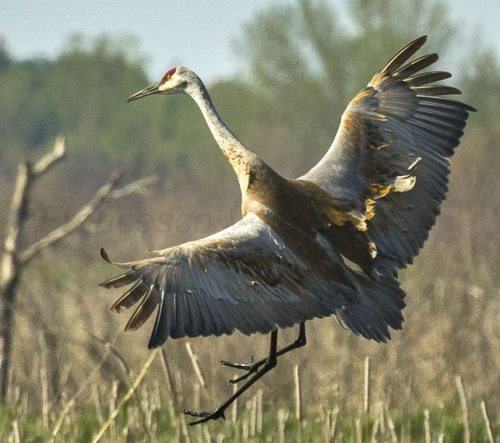 On Wednesday, October 2, I saw my first flock of Sandhill Cranes of the year; a flock of twelve landed in an alfalfa field on Anderson Farms and began to nibble young alfalfa sprouts. The cranes are remarkably punctual. I track them every year and here’s the scoop:

They travel here from Idaho and they can fly up to 400-500 miles in one day, usually at an altitude of around 6,000 to 7,000 feet, but often as high as 13,000 feet as they migrate through the Rocky Mountains. The New Mexico Department of Game and Fish estimates that about 25,000 cranes winter in the Middle Rio Grande Valley, and the large flocks are spectacular. I’ve seen coyotes stalk them as they’re feeding in the fields, but since they stand five feet tall and have great eyesight, it would be a miracle if they caught one. They are unafraid of humans and allow me to come within ten feet of them on occasion. Usually they don’t take flight when I approach them; they casually just stroll away. The one above is in a middle of a mating dance.