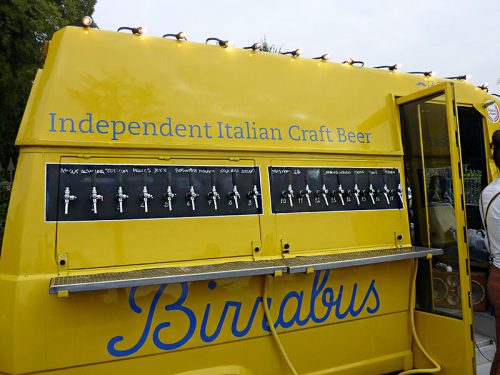 Italy used to be a country with great wine and mediocre beer but apparently that’s changing rapidly. I find it fun to drink beer in other countries and make comparisons. My three favorite beer countries are England, Germany, and Australia. The worst country for drinking beer is South Africa because the industry is dominated by SAB-Miller and all the mainstream beers taste like Miller, an extremely boring lager. Italy is still dominated by Peroni and Moretti, and a critic has written, “Italy consumes the lowest amount of beer per capita of any European nation, and when it has been drunk, it’s as a simple, watery thirst-quencher for field hands.” But in the last few years, a strong craft beer industry has sprung up there as evidenced by the Birrabus above, which was spotted in Bardolino by my beer-loving friend Harald Zoschke. It sports a sign in English reading “Independent Italian Craft Beer” and has 17 selections to choose from. Harald loves this bus and I envy him for having access to it. Just imagine how many liquor laws the Birrabus would be violating here in the states!