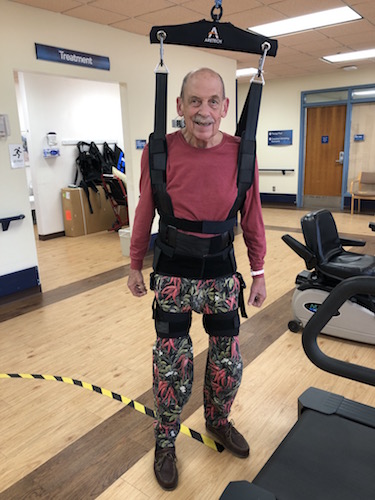 On November 27, 2019, MJ’s and my 34th anniversary, I was writing on the computer about 6 am when I lost control of my left hand and there were typos everywhere. Then I started drooling out of the left side of my mouth. When I stood up, I was dizzy and had difficulty walking. “These are stroke symptoms,” I thought. I alerted Mary Jane when she woke up and had her drive me to Lovelace Urgent Care, about eight minutes away. The nurses there examined me, took my blood pressure, and immediately called for an ambulance. In the emergency room, the doctors told me I was possibly having a stroke, and sent me to have a CT scan, which didn’t show much. Speech therapists examined me and gave me swallowing tests and then I was admitted to Lovelace Medical Center’s main hospital. An MRI revealed that I had suffered an ischemic stroke, one of the mildest of strokes. Still, the left side of my body was partially paralyzed, and my left hand was not functioning at all. I was given fluids intravenously, which meant I had to urinate every 20 minutes or so, in bed, using a plastic urinal.
The following day, Thanksgiving, Mary Jane told me that out roof was leaking from all the rain we had. Oh, great. The hospital served me a Thanksgiving dinner of turkey, dressing, mashed potatoes, and gravy, which was surprisingly good. MJ ate leftover chicken paprikash at home.
The next day, Friday, was the saddest of all. Jagger Henley, our 10-year-old Doberman, was suffering so badly from arthritis complications that Mary Jane had to call a mobile vet to come to the house and put him down. Tears ensued from both of us. On Saturday, I was transferred to Lovelace UNM Rehabilitation Hospital to begin therapy. For my first session, occupational therapist Brenna (name tags had first names only), focused on my left hand, and I had to use miniature tongs to move tiny plastic balls into small containers. Frustrating. But later, in the shower, I unconsciously switched the hand sprayer from my right hand to my left hand, and all of a sudden, my left hand was functioning again. Weak, but working. A minor miracle. Thus began my recovery, which lasted twelve days.
For three hours each day, physical therapists and occupational therapists worked hard on teaching me how to walk again. There were exercise machines, a walker to keep me upright, and medications to stabilize my blood pressure. Speech therapists gave me tests to see if my cognitive abilities had been affected by the stroke. I passed them all with flying colors–my mind had not been impaired. Slowly, the left side of my body recovered and I was off the walker and using a cane. Then came the ultimate test and I was attached to the ZeroG machine–see photo above. This ingenious device prevents you from falling as you walk without any assistance. Meanwhile, the therapist tries to trip you by speeding up the walk or by stopping it abruptly. I passed the straight walking, one foot in front of the other, but did trip on the side-to-side walking. No big deal–overall, I did great.
I was discharged on Friday the 13th, still using a cane for balance. But I can walk by myself, slowly and carefully, and I will regain my strength in the coming weeks, and soon will be birdwatching again along the ditch banks in the South Valley.
Acknowledgments. Thanks to everyone at Lovelace Medical Center: Doctors Wallace Gladden and Cyrus Abbasi; Nurses Edna, Steph, Karen, and Cathy; Techs John, Luz, and Jeanette; Physical therapists Sammy and Reina; Occupational therapists Darcelle, Brenna, and Matthew; and speech therapist Ana, who visited me every day.

Birds That Walk with Me