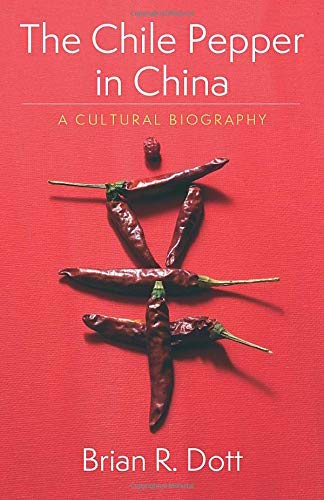 I am a positive thinker and hate to be negative, but this book is quite poor and has issues that need exploration. First issue, the cover. It is dried chiles arranged to make a Chinese language character, but what does it mean? Since I could not find any explanation for it in the book, I had to do my own research. With the help of Google Translate, I think I’ve figured it out. Here is the character for “chile pepper”: 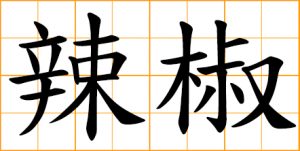 There are five characters strung together. The last three translate as “pepper.” The first two are “chile,” with the second symbol meaning la, or “spicy.” As you can see, the cover is a rendition of the first character, which indicates, with spicy,  a different kind of pepper that’s not black pepper. My point is: why did I have to figure this out? Why isn’t there an explanation for this in the book? Second issue, the author. Prof. Dott is an associate professor of history at Whitman College in Walla Walla. He has no credentials for writing about chile peppers. This is not a necessity, of course, but credentials equal credibility, yet I can find no evidence that Prof. Dott is a chilehead–no chile articles, no blog, no contributions to other blogs, no other books about chiles. The third issue is horticulture. Dott writes in the dust cover blurb that he explores how chiles in China went from obscurity to ubiquity. If that is true, why is he stuck in the past and ignoring the current horticulture of a country that supposedly grows sixteen million tons of fresh chiles a year? I was in southwest China in the summer of 2018 at China’s largest chilli conference and wholesale fair in the city of Zunyi, but this is not mentioned in the book. The chilli coverage of the online magazine (with printed edition, too), The Beijinger is excellent (see https://www.thebeijinger.com/blog/2018/05/01/exploring-chilies-china) but also is not mentioned in Dott’s book. Neither is the habanero-growing region of Hainan. There are 14 color plates of chiles in China but no list of accompanying captions–another failing of this book. Issue number four is the “recipes.” For all the supposed ubiquity of chiles in China, one would think that the author could find more than four “recipes.” I use that word in quotes because three of the four do not have instructions, just an ingredient list, so they are not true recipes. One would also think that an author with a Ph.D. would know things like that, but I guess not. I could go on discussing the failures of this book, but why bother? It is not recommended.

I’m Off to China!