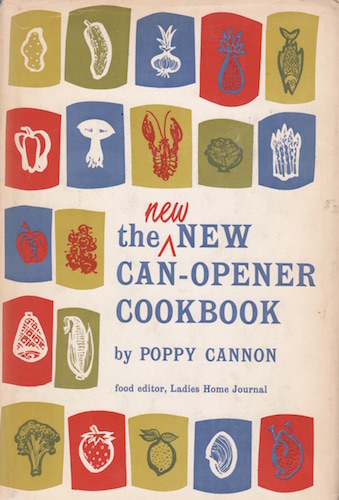 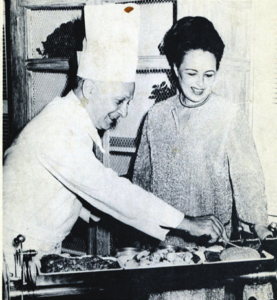 Poppy Cannon with Chef Henry Becker of the Beverly-Wilshire Hotel. Source: Back Cover of the cookbook.

Cookbook author Poppy Cannon didn’t intend for this book to be humorous. In the introduction to the third book in her “Can-Opener Series,” Poppy wrote, “Our new way of achieving gourmet food can happen only here–in the land of the mix, the jar, the frozen-food package, and the ubiquitous can opener.” Poppy, if you think the food in your book is gourmet, I’ve got some magic little mushrooms for you to try in your canned green beans. But alas, Poppy can’t try anything after falling twenty-three stories from the balcony of her Park Avenue apartment on April Fool’s Day in 1975. (I’m not making this up.) She was the food editor of Ladies’ Home Journal and the author of numerous cookbooks. Wikipedia notes, “In 1949 she became the second wife of the NAACP leader Walter Francis White (with whom she had an affair while he was married to his first wife, Leah Gladys Powell White) at a time when such a marriage was viewed as scandalous, not least within the Black community, some of whom viewed White’s marriage to a White woman as a betrayal.”
Here some of Poppy’s gems from the book:
–“The haunting flavor of tarragon added to canned beef gravy makes an interesting sauce to serve with meat or broiled chicken.”
–“Pickled pigs’ feet or lambs’ tongues in jars are among the less usual ready-to-serve meats.”
–“Golden Mushroom Sauce. You will need: Condensed Golden Mushroom Soup.” Canned Condensed Mushroom Soup is the most common ingredient in this book.
–“Armed with a can opener, I become the artist-cook, the master, the creative chef.”

And now, my favorite recipe from the book. Be sure not to burn the toothpicks and enjoy the smoky flavor of Sterno.

red cabbage
Canned or quick-frozen cooked shrimp
olive oil
lemon or lime juice or vinegar
garlic
curry powder
sour cream
Choose the prettiest  cabbage you can find, preferably one with large, loose outer leaves.
Cut the stem end so the cabbage will sit firmly on the platter or plate. Turn back the outside leaves
like the petals of a great rose. With a very sharp knife, scoop a round hole out of the top of the cabbage
jut large enough to hold a can of Sterno. Drain canned or quick-frozen cooked shrimp. Cover the
shrimp with French dressing made by combining 4 parts olive oil with 1 part lemon or lime juice or
vinegar; season with plenty of salt and pepper; add one clove of garlic, thoroughly crushed.
Let shrimp stand, covered by the French dressing for several hours or overnight. Prepare a dipping
sauce by adding 1/2 teaspoon curry powder to 1 cup sour cream.
At Serving Time: Drain shrimp, spear with toothpicks, and stud the cabbage with them. Light the Sterno and
allow guests to heat the shrimp over the flame. Some like the shrimp cold, some like it hot.
Everybody will enjoy the curried sour cream sauce.

Can You Barbecue Ice Cream?

An Ancient Technology That Still Works!