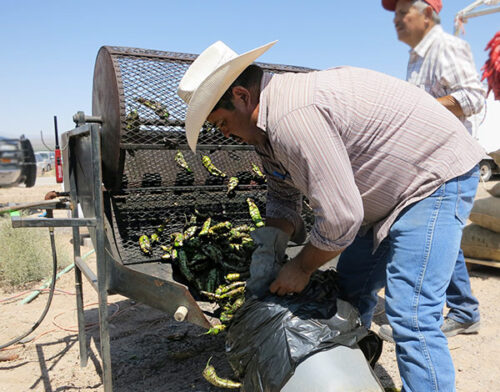 As the green chile season winds down, some retailers are having difficulty supplying their customers because a lack of pickers means that the green pods are still in the fields. Most of the problems seem be north of Hatch in places like Lemitar because the pickers, mostly Mexican nationals, don’t want to ride the busses that far north–there’s still plenty to pick in Las Cruces, Hatch, and other locations. In Albuquerque, the Sichler Farms store on Sn Mateo near Lomas had plenty of fresh green and fresh red pods because their fields are in Los Lunas and they use local pickers. I spoke with Ken DeWeese, the owner of Chile Traditions on Montgomery Boulevard. and he said he had plenty of green chile from Hatch, but that red chile was scarce and so he had fewer ristras than he usually did at this time of year. Also hampering the harvest is that nasty Covid-19 virus, but there’s little that can be done about that problem. Chileheads may have to visit several retailers to find all the chile that they are looking for. And some of the retailers have frozen chile that has been roasted, peeled, and chopped.