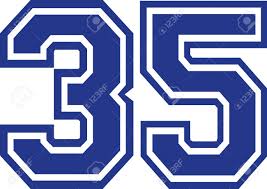 On the day after Thanksgiving, Mary Jane and I enjoyed our thirty-fifth wedding anniversary. So, how did we celebrate this achievement? We went out to an expensive restaurant and feasted–NOT. Restaurants here are closed and we’re under a lockdown–or a reset, as the politicians delicately call it, so there was no place to go and celebrate. We stayed home and ate leftovers, but were were happy–we had each other, which is all that really matters on an anniversary. I used a football font for the number above, as there was  some of that reverberating around our house on Beall Court, where we’ve lived for our entire marriage. And despite the pandemic, the lockdown, and the lack of restaurants, this anniversary was ten times better than last year, when I spent it in the Lovelace Rehabilitation Hospital.

Trump is right–there was a vast conspiracy that sabotaged him in the election–namely, 80 million plus voters who preferred the Democratic candidate.

The only good thing to come out of the pandemic has been the realization of the power and convenience of holding meetings online by using Zoom, Google Meet, or whatever other platform is available. As a chile pepper expert I give interviews to the media all the time, but in the past I was limited to phone calls for out 0f town media. But on Wednesday, I did a Zoom interview with Anastasia Molchaninova for her show “NashPotrebNadzor” (roughly, “Our Consumer Supervision”) on the Russian federal TV channel NTV in Moscow. They recorded it for later broadcast, and things went very well as I explained the methods used in the U.S. to prevent the adulteration of chile powder. I was astonished when Anastasia told me that Russia does not have an agency like the F.D.A. to monitor food quality. And coming up Tuesday I have a Zoom meeting with Mario Zamprotta of the World Chilli Alliance in Rome. And it’s hard to get to Rome these days.

Have a happy holiday season from the happy couple on Beall Court.

Report from the Second Lockdown