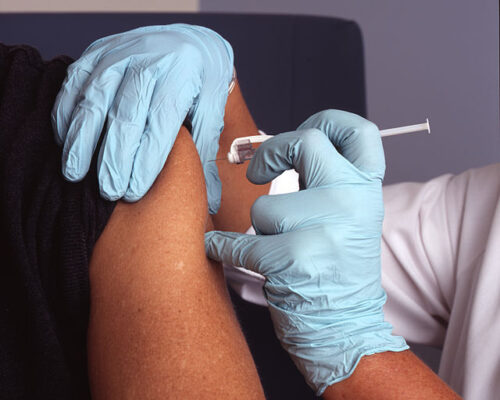 What do you think of the image above? Does it give you a warm and fuzzy feeling? I didn’t think it would. Aside from the illogical, die-hard (or easy) anti-vaxxers, there are a number of people who are simply terrified of hypodermic injections. Trypanophobia, fear of needles, also known as needle phobia, is the extreme fear of medical procedures involving injections or hypodermic needles. It is a Diagnostic and Statistical Manual of Mental Disorders recognized phobia affecting approximately 50 million Americans, making it a top-ten American fear. And I can’t think of many people who like getting stuck with needles, either, so can we agree that the above photo is not a pleasant image for a vast majority  of the American population? Yet as our government uses every possible method for convincing people to get vaccinated against Covid-19, an image like this, or worse–a video closeup of a needle going into a person’s arm–appears in literally every single news report on TV. This is like a TV commercial for ice cream that shows a cowpie. If you want more people vaccinated, stop showing needles going into peoples’ arms. How about a really good looking male or female doctor giving the vaccine pitch, and then at the end, an impossibly cute kid says, “I didn’t feel a thing!” Since I have literally written hundreds of radio and television commercials, I’ll bet you I could come up with more than a dozen ideas for positive vaccination commercials in less than an hour. And not one of them would ever show a needle. And that’s my two cents worth on the subject.