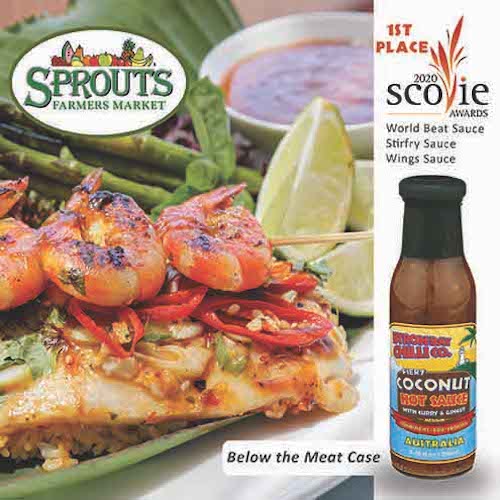 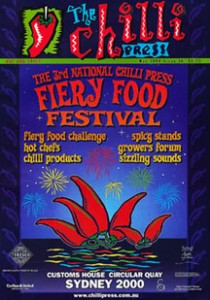 The fine sauces of the top Australian hot sauce company, Byron Bay Chilli, are now available in selected supermarkets. Here’s how it happened. In 2000, Mary Jane and I took the long, exhausting flight from LA to Sydney, Australia. Why? Along with Diana Kennedy, I was one of the guests of honor at the Australian National Fiery Food Festival. (The full story of that festival is here.) During the festival, I came to know and like exhibitors John and Lynne Boland. They owned Byron Bay Chilli Company, and their sauces were outstanding. Over the years, John and I stayed in touch. He wrote an article for us (read it here), kept me up-to-date on trends in Oz, as they call their country, and one year entered some of their sauces in the Scovie Awards. And walked away with the Grand Prize! It was my favorite sauce that won, in the image above, the Spicy Coconut Hot Sauce. It was our first international grand prize winner.
After exhibiting at our National Fiery Foods & Barbecue Show, and getting the same question, over and over, “Where can I buy this?”, John made the decision to export his sauces to the U.S., and he retained our company to assist him. His company became a Sunbelt Shows Media Sponsor. We helped him find an importer, and after the sauces began to appear in supermarkets, we began to handle his advertising stateside. So far, his supermarket expansion has focused on the Southwest. Here’s the list: