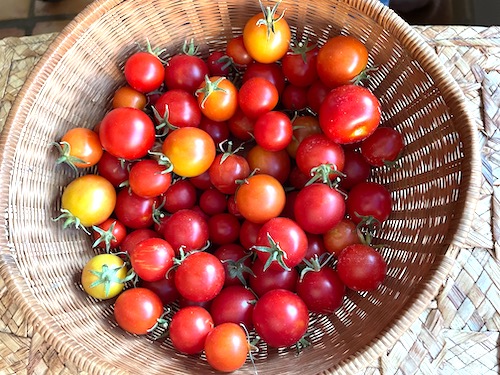 Image Above: A small fraction of all the ‘Punta Banda’ tomatoes grown.

As usual, the growing season in the South Valley of Albuquerque was hot and dry and in general our garden did okay, but not great. I’m still spoiled by the summer a few years ago when the garden produced 302 pounds of tomatoes; that will probably never happen again in my lifetime, but I always hope for a repeat of that success. There are so many factors involved in growing plants that success is never guaranteed for every variety you grow. Here’s how my varieties did this year.
Beans. The crop of pole beans was excellent. We blanched and froze most of them as green beans up to mid-August, when I decided to let the rest of the pods mature and dry for use in New Mexican meals during the winter; some will be planted next season.
Cannabis. Totally legal in New Mexico, pot heads are allowed to grow six flowering plants. I only had four, which were the ‘Dream Kush’ strain, one thats 80% indica species. I usually grow sativas, and these females were shorter, bushier, and yielded fewer flowering tops. The tops are incorrectly called “buds”; a bud is the beginning of a flower, not the end of one like the image shown below.
Corn. I only grew three plants because I like the way they look in the garden. The yield was a whopping six full ears, but the flavor was wonderful.
Herbs. I gave up on growing thyme–it doesn’t grow fast enough and those tiny leaves are a pain in the fingers. Italian parsley, chives, basil, and dill all did well, but I learned to never let dill wilt–the plants never recover and spring back up. They dry and die.
Ornamentals. I fertilized all the flowering plants on our front patio with MiracleGro Bloom Booster Flower Food and had remarkable results, especially with the tropical hibiscus plants. The fertilizer is 10-56-10, with 56 being phosphorus, essential for flowering.
Peppers. Since I was growing a lot of plants traditionally used in milpas, I bought seeds of a variety called ‘Quatro Milpas’, named after the town of the same name in Sonora. Bad mistake. The plants and pods were small and useless. Fortunately, chile is cheap and plentiful in New Mexico. It is one of our two State Vegetables, but it’s not a vegetable, it’s a fruit. The other State “Vegetable” is not one either; the pinto bean is a legume.
Squash. My largest raised bed is made of railroad ties and apparently zucchini plants are negatively affected by the creosote in them. Small plants and zero squash.
Tomatoes. At last, an heirloom variety with a great yield! ‘Punta Banda’, a variety from Baja California named after a peninsula, is a cherry tomato. The plants, averaging 2 1/2 feet tall, had between 70 and 100 fruits each, and we are still harvesting them. The seeds are available from Native Seeds/SEARCH. 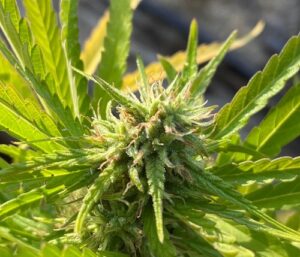 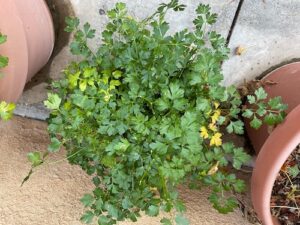 A bushy Italian parsley plant will winter over in our greenhouse with other herbs. 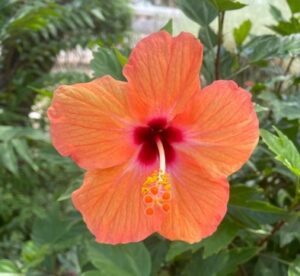 In a normal summer, this peach-colored hibiscus plant would have five blooms total. After fertilizing, it had forty by September 1! 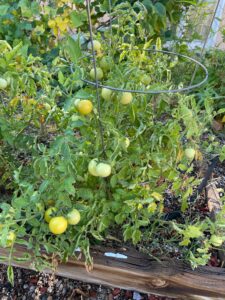 Loads of fruit on the ”Punta Banda’ tomatoes.

Report from the Winter Garden