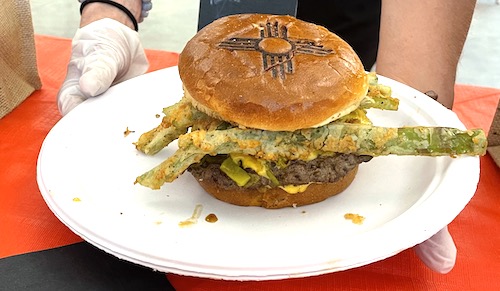 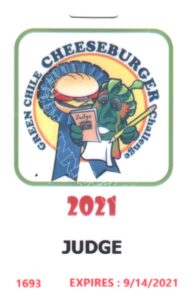 Yesterday I judged the Green Chile Cheeseburger Challenge held at the Agricultural Building at the New Mexico State Fair. I joined eight other volunteers in order to determine which restaurant in the state made the best spiced-up cheeseburger. I must say that all of those entered were delicious, but one, shown above, was clearly the best. Why? Well, see those objects sticking out of the sides of the burger? Those are green chile strips that have been battered and deep-fried. They gave the burger a totally unique flavor which stood out from the rest of those we tasted. This burger, the creation of the Oso Grill in tiny Cloudcroft, New Mexico (population 674), was the winner of the 2021 challenge. And it’s not the first time. Craig Vencill, the organizer of the event for the State Fair, told me, “Oso Grill has won the Green Chile Cheeseburger Challenge 3 years running, and I’m talking both the ‘Blind Judging Award’ as well as the ‘People’s Choice Award’–unbelievable.  They also said this was their last time doing it–now they want to win the Salsa Contest!” For restaurant chefs thinking about entering the contest, I have some advice.  Two important categories of judging were the quality and cooking of the ground beef and the presence on the tongue of the green chile. So avoid obscuring those flavors by piling on other ingredients like onion, tomatoes, lettuce, mushrooms, mayonnaise, and so on. Keep these to a minimum. Instead, change up the cheese. Instead of Swiss or cheddar, go with manchego or a pimento cheese spread. That was a fun event to judge and hopefully I’ll do it again next year!