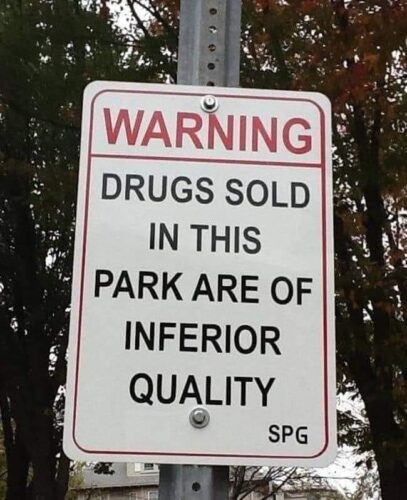 Here’s a clue: the “SPG” at the bottom of this funny sign stands for State Patrol of Georgia, which tells me that the sign was probably posted in a city park in Atlanta. I suspect it’s Piedmont Park, where I enjoyed watching a new, mostly unknown Southern rock band band perform in the early 1970s. It was called the Allman Brothers Band. There was plenty of marijuana smoke in the air that day and the park had a reputation as a drug dealers’ hangout even back then, and I doubt that the situation has changed much in half a century. Atlanta is probably the most liberal city in the Deep South, so you might think that legalization is on the horizon. Don’t hold your breath. Even medical marijuana is not allowed, except CBD-only products. And that’s only in Atlanta and Savannah. As reported by NORML, here are the Georgia marijuana possession penalties:

But wait, there’s more: “Any conviction of a marijuana possession, sale, or cultivation offense results in suspension of driving license.” That’s a low blow since now convicted people will have to take the city bus to meet with their dealers!
But even legalization has its problems. Here is the law: “New Mexico’s marijuana legalization law took effect with limited personal possession and cultivation officially becoming legal for adults 21 and older. People can now lawfully possess up to two ounces of cannabis, 16 grams of concentrates and grow as many as six mature plants for personal use.” But six mature female plants can easily yield a half-pound of tops each, which would mean three pounds, or 48 ounces. After you take out your two legal ounces, what do you do with the remaining 46 ounces? It’s illegal to sell it or possess it, so maybe you can give it away to 23 people? I’m not sure. Add it to the compost pile? I seriously doubt it. Anyone have any ideas? It’s a cannabis conundrum.