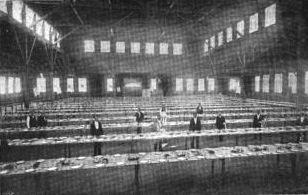 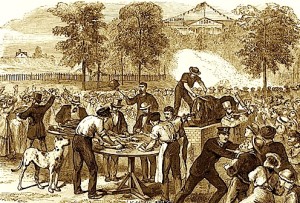 “The second ox, a thousand-pounder, was now placed upon the spit, while the number of visitors to the curious scene began steadily to increase. By noon there were over a thousand, and the festivities began. Everybody was invited to partake of the feast, which consisted of sandwiches, for which the first ox had been cut up. Eight hundred loaves of bread were used in the operation, and although it reads like a fairy tale, the invited guests ate so greedily that in twenty minutes all that remained of the feast were the bones of the animal. The second ox was divided up at night in the presence of 50,000 people, while five speakers (with a political purpose) were spouting from different platforms in the grounds. It was one of the largest barbecues ever held, and ended in a blaze of enthusiasm and gastric satisfaction.”  Read the entire article, “Gargantuan Georgia Barbecues, 1897” here.