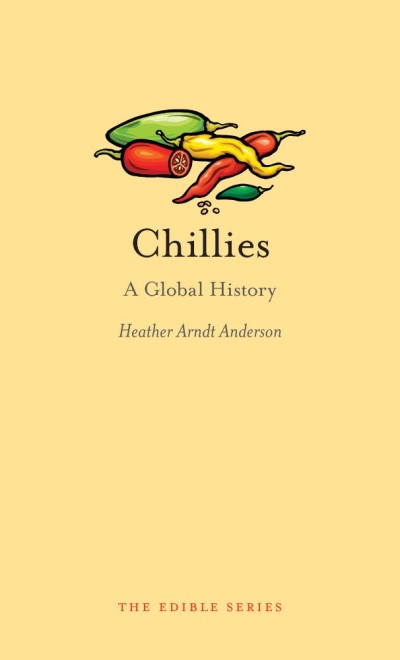 The author describes her volume as “this little book,” but I was impressed with the quality of the information and illustrations packed into a book measuring five by eight inches with a mere 155 pages. She picked a subject so vast and multi-disciplinary that she had to decide what subjects to include and which to de-emphasize or eliminate. So she covered the basics of taxonomy and ecology, the Western Hemisphere origins of the genus Capsicum, its spread around the world, its healing properties, and what Anderson calls “Chilli Pepper Madness.”

What Anderson couldn’t cover in any significant detail was chilli (the U.K. spelling) identification, genetics, breeding, gardening, horticulture, products, legend and lore, recipes (she has 12 in the book), world chile cuisines, the chemistry and power of capsaicin, the archaeology of chiles, and quite a few more subjects. The fact that her subtitle has the word “history” in it absolves her of a lot of these omissions. So what we have then is an overview that is focused on her basics, mentioned above.

But Anderson erodes her credibility by not doing sufficient research on a controversial subject concerning New Mexico chiles—the so-called Hatch chile. She writes, “The Hatch chilli is ubiquitous in the Southwest” and “In order to be called Hatch chillies they must be from the Hatch Valley, a scabby vale that hugs the Rio Grande in southern New Mexico.” Both of these statements are demonstrably false. There is no such thing as a Hatch chile. It is not a horticultural variety, like ‘NuMex 6-4 Heritage’, the most commonly grown variety in the state. The word “Hatch” is simply a marketing term that encompasses all the New Mexican types grown in the state, and contrary to popular belief, the Hatch Valley simply doesn’t exist. I have examined the maps of the area as produced by the U.S. Geological Survey and they show only two valleys in southern New Mexico: the Rincon Valley and the Mesilla Valley south of it. The Village of Hatch is located in the Rincon Valley, which is hardly scabby, meaning despicable.

Anderson also falls for the notion that the “high elevation and the well-drained, fine-sandy Rio Grande fluvium—the Brazito soils—provide the unique terroir for growing Hatch chillies.” Luna County, where Deming is located, also grows varieties of New Mexican chiles, and I consulted the Soil Survey of Luna County as produced by the U.S. Department of Agriculture and the New Mexico Agricultural Experiment Station (1967). It reveals that there are no Brazito soils in the county; the most common soils are the Hondale-Mimbres complex, the Mohave sandy-clay loam, and the Mimbres and Verhalen soils. I seriously doubt that even the most discerning palate could tell the difference between a ‘NuMex 6-4 Heritage’ chile grown in Hatch and one grown in Deming.

So, do these errors about the supposed Hatch “chilli” ruin this book? No. As I discussed in email with Heather Anderson, she fell victim to all of the media coverage over the past thirty years touting “Hatch chiles” that resulted from the highly popular and well-attended Hatch Chile Festival that happens every Labor Day Weekend. She was brainwashed into believing that “Hatch chiles” were an actual horticultural variety, which they are not. This is a minor error which does not invalidate the rest of this perceptive, well-written overview and summary of the history of chile peppers.

Battle of the Chile Powers