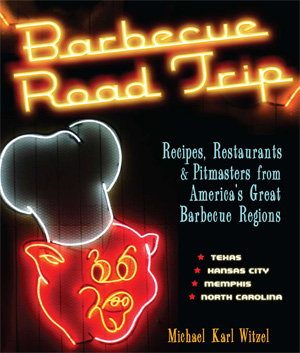 I was looking through Michael Karl Witzel’s fun book, Barbecue Road Trip, when I spotted a reference to Bill’s Barbecue in Richmond, Virginia.  This brought back a flood of memories.  In 1967, I was in graduate school at the University of Richmond and lived on Monument Avenue, just a few blocks from Bill’s.  I never had much BBQ when I was growing up in northern Virginia, so I started getting takeout from Bill’s.  Invariably it was the same thing every time: minced pork topped with coleslaw and a eastern North Carolina-style barbecue sauce.  And Bill’s is still in business today, 87 1/2 years after its founding on June 2, 1930.  There never was a “Bill.”  An out-of-work sign maker named the restaurant and painted the logo on the front window–in trade for some barbecue, of course.  The logo is still the same, and it looks like it was designed in 1930: