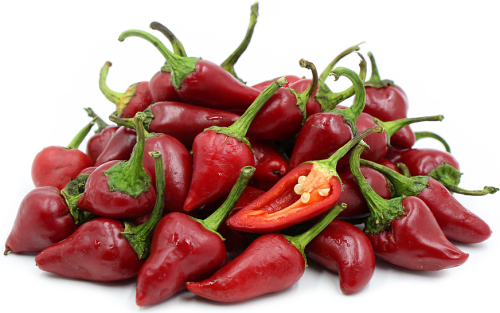 According to Nation’s Restaurant News, trendy restaurants are increasingly turning to Calabrian peppers. Calabria is the toe of the Italian boot, and a few years ago my wife and I were at the Peperoncino Festival in Diamante, and virtually every meal we ate was spicy. Now, Calabrian peppers (usually from jars), are turning up in Italian-themed restaurants around the country: 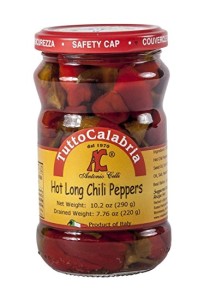 –The Olive Garden chain serves a Spicy Calabrian Chicken appetizer.
–On the menu at Zoës Kitchen in Plano,Texas are two dishes: Mediterranean Baked Feta at topped with cherry tomatoes and Calabrian peppers and rosemary ham and mozzarella piadina with Calabrian pepper aïoli.
–The sausage pizza at Garage Bar in Louisville, Ky., puts them alongside milled tomatoes and confit shallots.
–Ferocious Puppies, or thick-cut fries served at Animale in Chicago, are served with pancetta, onions, Calabrian chiles and a sunny-side-up egg.
–Calabrian chiles are in the vinaigrette that finishes the Charred Romano Beans at Sardella in St. Louis.
–The rigatoni with clam sauce also has Calabrian hot peppers in it at Atlanta’s Noble Fin.