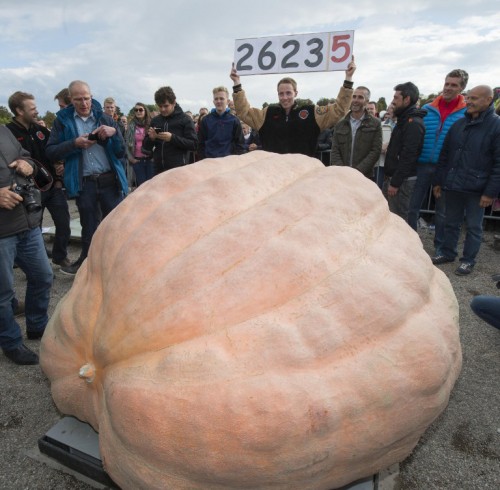 In 2016, Belgian horticulturist Mathias Willemijns grew a pumpkin that broke the world record for largest gourd at 2,625 pounds. Yes, you could make a jack o’lantern out of it–if you have a chainsaw, because the pumpkin’s walls are a foot thick! Willemijins is part of a worldwide movement in competitive horticulture to grow giant crops, and many of the winners are now coming from Europe. For example, in addition to Belgium, the largest zucchini (64.49 pounds) was grown in Wales, as was the largest carrot (20 pounds). But the U.S. still holds the record for the largest green cabbage (138.25 pounds, Alaska) and the largest watermelon (350.5 pounds, Tennessee). 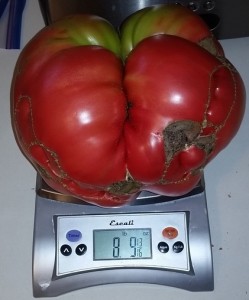 The U.S. also holds the world record from largest tomato (at left), grown by Dan Sutherland of Waltsburg, Washington, at 8.61 pounds in 2016. Incidentally, the largest pumpkin, shown above, in August gained one to two pounds an hour and guzzled 100 gallons of water a day. For more records, see the lists provided by the European Giant Vegetable Growing Association, here.