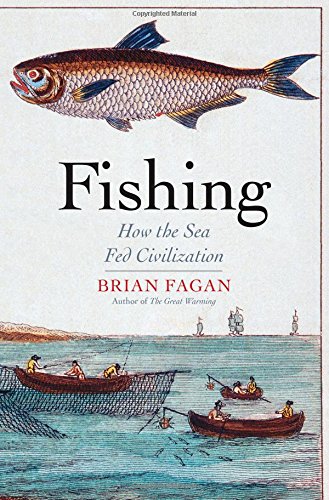 This book hooked me. It’s not about using plastic worms to fool largemouth bass—in fact, there’s little mention of recreational fishing in this book. That’s because renowned archaeologist Brian Fagan has focused his attention on commercial fishing, as reflected in the book’s subtitle: “How the Sea Fed Civilization.” Necessarily jumping back and forth in time, Fagan traces the influence of commercial fisheries around the world and proves that fishing was just as important to human advancement as the advent of agriculture. The downside to this story, of course, is over-fishing and the depletion of fish stocks such as the cod of the North Atlantic. But even these events are starting to have an upside to them: in 2014, more farm-raised fish were eaten than wild-caught, and Fagan reports that “Stocks of North Sea cod and haddock are improving significantly.” However, it will take decades of not fishing to counter centuries of uncontrolled over-fishing. The answer lies in controlling the fish stocks we have left while increasing aquaculture. “Global food fish aquaculture doubled from 32.4 million tons in 2000 to 66.6 million tons in 2012,” he writes. This is a well-researched and fascinating book that reveals the ingenuity of mankind as well as its greed.

A Ponga, Some Yellowtails, and Mexican Sashimi