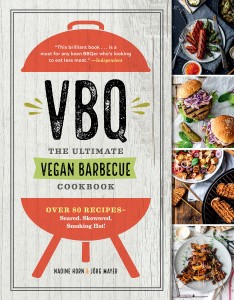 As unbelievable as it sounds, this spring there will be not one, but two vegan barbecue cookbooks. I actually like a lot of vegan foods, so I’m not 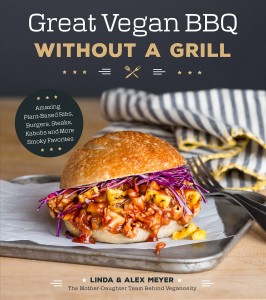 disparaging the concept of veganism. But barbecue is specifically a way of cooking meat, period. In VBQ: The Ultimate Vegan Barbecue Cookbook, the meat substitutes include a quinoa and chickpea burger, eggplant hot dogs, and pulled oyster mushroom sandwiches that are supposed to resemble pulled pork. And even worse, Great Vegan BBQ Without a Grill not only dispenses with the meat, but also a grill to cook it on! Heresy or stupidity, or maybe it’s both. I know these cookbook authors are just trying to make a buck by cashing in on two incompatible popular cooking trends. You can’t cook BBQ without meat and a grill, but Linda and Alex Meyer try with their meat substitutes: jackfruit, tofu, seitan (BBQ Jerk Jerk Chick’n) and mushroom burgers with horseradish pesto. I’m surprised that these authors have not been strangled by meat lovers. There’s nothing wrong with vegan–but it’s very, very wrong to call it barbecue.

Smoking and Grilling in Winter Weather