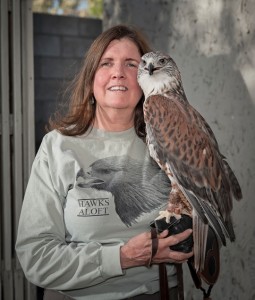 In 2001, then Governor Gary Johnson appointed me to the board of directors of the New Mexico Farm and Ranch Heritage Museum in Las Cruces. I was confirmed by N.M. Senate and have served on the board until a few weeks ago, and for five of those years I was chair of the board. A few weeks ago, the office of our current governor, Susana Martinez, informed me that I had served my term and I was being replaced by a howler monkey in residence at the Bio Park Zoo. No, that’s fake news. I have no idea who she replaced me with. But it’s bye bye longhorn cattle and hello falcons, hawks, and owls, because I have just been elected to the board of directors of Hawks Aloft. The mission statement of my new organization is: “Hawks Aloft, Inc. is a non-profit, 501(c)3 organization incorporated in 1994 and based in Albuquerque, New Mexico. We work to conserve indigenous wild birds and their habitats through avian research, conservation education, raptor rescue, and cooperation with other organizations.” I think my new position will be as interesting as my last because as my readers know, I’ve been a serious birder since I was a child and even rescued a pair of kestrels when I was 11 years old. I will be working closely with the director of Hawks Aloft, Gail Garber, pictured above with a friend.