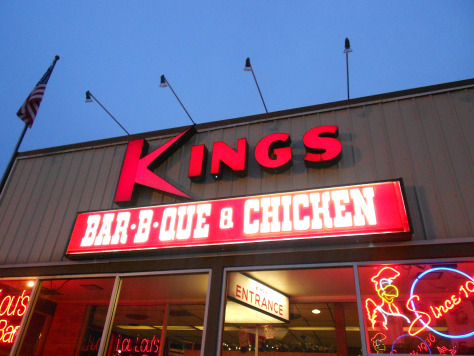 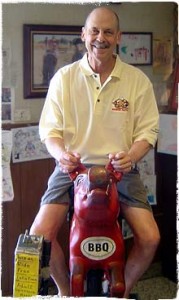 Dave Riding the Pig at Kings

On yesterday’s episode of “A Chef’s Life” on PBS, chef Vivian Howard is going to prepare a “Pig in a Puppy,” which is pulled pork and cole slaw inside a large hush puppy. To obtain the pulled pork, she visits Kings Barbecue in Kinston, North Carolina. And I suddenly realized that I had eaten there once with Dr. BBQ, Ray Lampe, during our tour of North Carolina barbecue joints in 2006. We visited 22 restaurants in six days and not one of them served beer. I’ve never missed New Mexican food more than that! You can read about our trip here. That is my version of what happened. Ray’s version was published in Dr. BBQ’s Big-Time Barbecue Road Trip, which you can order here. Out of the 22 restaurants we rated, Kings came in sixth place, a pretty good rating.