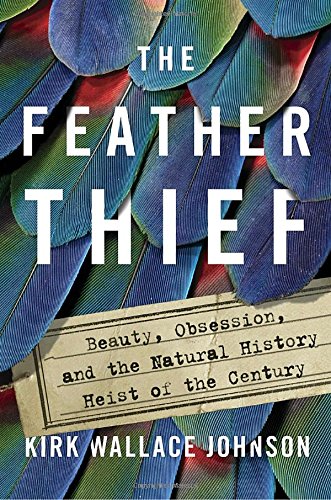 In my library I have a few books devoted to obsessive people in natural history. Orchid lovers come to mind in books like The Orchid Thief and Orchid Fever. Butterfly smugglers and other obsessive people are covered in Winged Obsession and The Dangerous World of Butterflies. The Dragon Behind the Glass tells of tropical fish lovers obsessed with the Asian Arowana, the most expensive tropical fish in the world. And herpetologist Raymond Ditmars had a lifelong obsession with the world’s largest viper, the bushmaster of South America. Well, I’ve added another book to my collection of natural history obsessions, The Feather Thief, by Kirk Wallace Johnson, and this is the weirdest one yet. It tells the story of Edwin Rist and his obsession with the feathers used in the arcane Victorian art of tying salmon flies that are rarely—if ever—used in fishing. Rist wanted exotic feathers so badly that he broke into the Tring Museum, part of the British Museum of Natural History and stole 199 dead and preserved birds worth millions of dollars. They were some of the most beautiful and rarest birds in the world, including Birds of Paradise, Resplendent Quetzals, Spangled Cotingas, and Red-ruffed Fruitcrows. Then he proceeded to sell the birds and feathers to other fly-tying obsessives so he could buy a golden flute after he graduated from the Royal Academy of Music in London. Go ahead, accuse me of making this up. But I’m not. For any natural history enthusiast, this is a must-read book. For people who love birds and feathers, this is a punch in the gut, but you can’t stop reading it. Highly recommended.