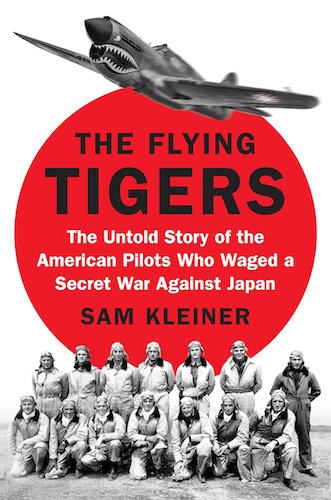 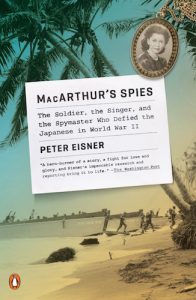 Why am I so fascinated with books about World War Two? Is it because I was born during the war in 1944? Was it because my father was in the Navy during the war, stationed in London? He was in what is now called ELINT–electronic intelligence. He was a Lieutenant Commander, an electronics engineer, a spy who listened. Whatever the reason, it’s not so much the reading about the battles that I like, it’s the human stories and the technology. Recently I’ve read one of each. MacArthur’s Spies: The Soldier, the Singer. and the Spymaster Who Defied the Japanese in World War II, by Peter Eisner is the former and The Flying Tigers: The Untold Story of the American Pilots Who Waged a Secret War Against Japan, by Sam Kleiner is a little of both. MacArthur’s Spies is mostly the story a woman of many surnames named Claire who kept forgetting to get divorced before she remarried. In Manila during the war, she opened a nightclub called Madame Tsubaki’s as a cover for spying for Douglas MacArthur, who had vowed to return and free the Philippines from the Japanese Occupation. Through the nightclub, she also raised money to buy food and supplies for the Filipino and American guerrillas in the mountains who were raiding and sabotaging the Japanese. And this is where the author makes a critical mistake–not once does he describe a raid or sabotage, which would have made the book much more interesting. As it is, without that kind of description, the guerrillas never really come alive. Claire herself was a heroine but she does not come across as particularly likable in this story. I give this book a “C.”

The Flying Tigers, on the other hand, has plenty of action and very likable characters. It’s the story of a clandestine group of pilots who were employed by the Chinese (namely Chiang and Madame Kai-shek)  to attempt to drive the Japanese out of China and Burma. America was violating its own neutrality at first, but after Pearl Harbor, the American Volunteer Group, as they were first called, became The Flying Tigers and American heroes–John Wayne starred in the movie with the same name. They faced death everyday and many of them died, but they successfully destroyed hundreds of Japanese planes and delayed their conquest of Burma. They were led by another Claire, this one a man, Claire Lee Chennault, who had resigned as a captain in the Army Air Force, ran The Flying Tigers as a civilian, and later rejoined the Army Air Force and became a Brigadier General. It’s a well-told, fascinating story, and I rate the book an A-.