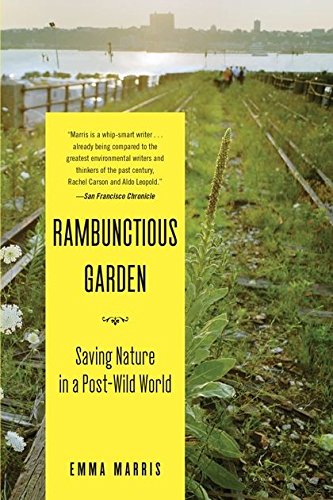 The first thing on my mind is the highly successful 31st annual National Fiery Foods and Barbecue Show that we produced over the weekend. The crowds were huge, the weather was perfect, and the exhibitors were elated. One could not ask for a better show, and I will prepare a more detailed report soon.

The second thing on my mind this morning is the remarkable book I just read, The Rambunctious Garden, by Emma Marris. Finally, here is a positive book about the environment in an ever-increasing gloom and doom attitude about how mankind is destroying the world. Instead of a formal review of this book, I’m going to just give you what I think is the best quotation from it.

“In the past ten years or so, many scientists have moved beyond the notion that the goal for any piece of land is returning it to an unobtainable baseline. They are rejecting a view of the world that says a place must be completely ‘pristine’ to count as nature; that view would imply that there are only two possible future states for most ecosystems: perpetual weeding and perpetual watching or total failure. They are embracing instead a wider vision of nature managed for a wider array of goals. Instead of focusing on the past, they are looking to the future and asking themselves what they’d like it to look like.”

Reason magazine noted, “Marris argues that the conservation and appreciation of nature can take place at far less exotic locations, such as backyards, city parks, farms, and even parking lots.” For example, Albuquerque has the largest population of Cooper’s hawks of any American city; and the walks I take in the South Valley reveal an astonishing variety of wildlife from golden eagles to beavers. We can never hope to return any piece of land to virgin wilderness because mankind has changed it too much; all we can do is appreciate how much of nature has survived our meddling.