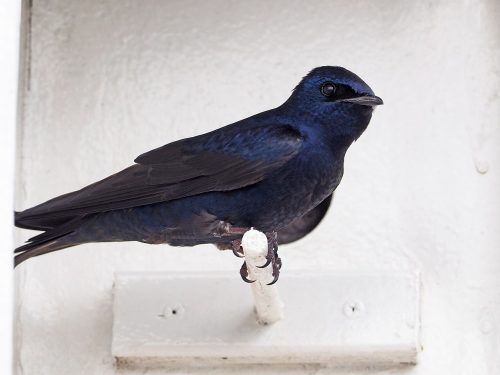 The image above is a purple martin at rest. It is the largest swallow in North America and is not supposed to live in the South Valley of Albuquerque, so it is not listed in A Field Guide to the Plants and Animals of the Middle Rio Grande Bosque (UNM Press, 2008), my bible for nature studies in this region. But that’s not unusual, for I’ve listed eleven other bird species that I’ve seen in the valley that aren’t in the book, like the common black hawk I’ve seen four times and the curve-billed thrasher that lives in our front yard. National Geographic’s Field Guide to the Birds of Western North America shows the bird in western and southern New Mexico but not in Albuquerque, so the one I saw is what birders call a “casual visitor.” It feeds on wasps, flies, butterflies and just about any flying insect, including dragonflies. The males are a solid purple but the females have an off-white breast. Where they are common, people erect purple martin houses to attract nesting flocks of them, like these at Maumee Bay State Park in Ohio used for insect control. 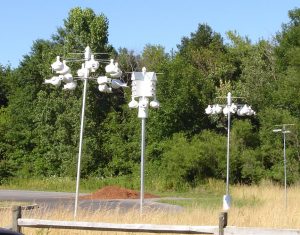 In other news, Mayor Tim Keller has declared Albuquerque a haven for migratory birds as the city unveiled a new map for birders and chose a beloved hawk as a mascot for the forestry program. “Our urban forest and the wildlife it supports make our city a better and more beautiful place to call home,” Keller said in a news release. “Making the extra effort to protect and enhance habitat for migratory birds and other wildlife improves our quality of life and extends our commitment to sustainability.” The birding map looks like this: 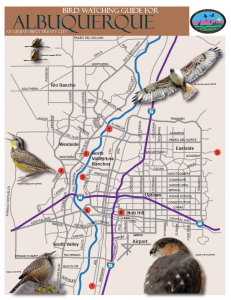 Mary Jane and I live near the bottom red dot. The Albuquerque Urban Bird Coalition has also unveiled a birding map to encourage bird-related tourism and proclaim the Cooper’s hawk as the new mascot of the city’s forestry program.