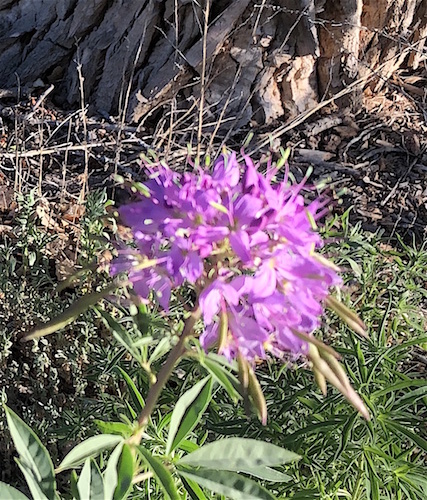 I recently took a 2.2 mile walk around New Mexico’s newest wildlife refuge, and I was impressed by its beauty and its potential. It is called the Southwest’s first urban wildlife refuge, but since it’s seven miles south of the city limits of Albuquerque, it’s not really urban at all. It’s called the “Valley of Gold” because it’s located on the site of the old Price’s Dairy and their main product was Price’s Valley Gold Milk. The easternmost section of the refuge is a working farm that is growing grass hay. It’s not a large refuge; its 570 acres is smaller than the 700-acre Campbell Farms alfalfa field that I walk around, and far smaller than the famous Bosque del Apache NWR, which is 57,331 acres in size. But it does have a lot of nature; above is a photo of Blue Lettuce, the oddly-named wild flower that jumps out of underbrush to please the eyes. Fifty-four species of birds have been spotted so far this year, and I saw 17 on my brief walk, as well as a cottontail and a jackrabbit. Additionally, I spotted an eastern bluebird, a flock of Canada geese, meadowlarks, a rock wren, and, of course, lots of mallards. To get there, take Second Street south past Rio Bravo, past the community of Mountain View, and it’s there on the right. Follow the signs to the Bosque parking area. It’s muddy in places because of the high river, so be prepared. Admission is free

The Birds of Summer: Beautiful Songbirds