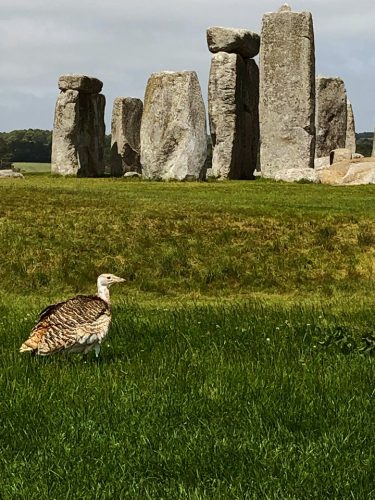 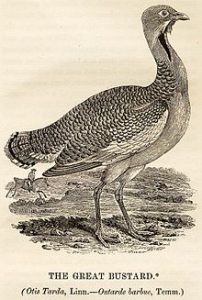 Wood engraving by Thomas Bewick in his A History of British Birds, 1797.

It wasn’t even my sighting! Lois Manno gets the award for her avian discovery in England recently. This bird is a great bustard posing in front of Stonehenge. Great bustards went extinct in England in 1832, so how is this possible? Well, they may have disappeared from England, but tens of thousands of bustards still live in Europe, especially in Spain and Portugal. Recent attempts to reintroduce it into England have met with some success and there is a population of 40 birds on Salisbury Plain, which is the location of Stonehenge, so she photographed one of those forty surviving bustards. The huge adult male great bustard is amongst the heaviest living flying animals. It is also arguably the most sexual dimorphic extant bird species, in terms of the size difference between males and females. The male bustard is three times heavier than the female. P.S. from Lois: “I have since learned that this bird is named Gertrude, and she visits Stonehenge every year, alone, for a few weeks in spring. Nobody knows why. It’s been happening for the last 5 years or so.”