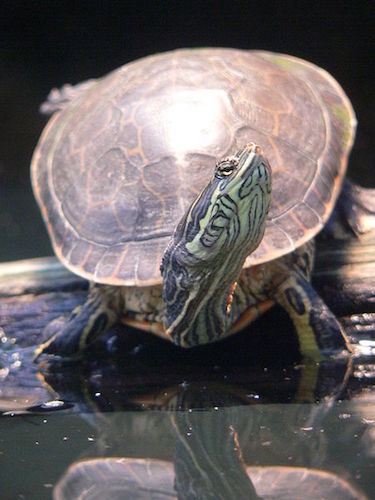 Because I write about birds so often, my readers probably think that they are the only wildlife in the South Valley of Albuquerque. Let’s just say that birds are the most common form of wildlife here and the flashiest, so they get the most attention. Lately I’ve been spotting painted turtles, like the one above, sunning themselves on the concrete spillways of some of the larger drains that adjoin the alfalfa fields of Anderson Farms. Once they see me, it’s “plop” and they’re in the water, swimming to the bottom. When I was a kid about age 11, my father helped me build a miniature zoo, which included a small, kidney-shaped concrete pool where I kept baby painted turtles, sliders, and snapping turtles. I also attempted to keep minnows and very small sunfish, but the turtles would eventually catch and eat them despite all the worms I fed them. Seeing the painted turtles here brought back fond memories of walking along Holmes Run, a stream in the forest that adjoined the housing development where we lived, which was called (and still is, as far as I know) Holmes Run Acres and it’s in Fairfax County, Virginia. I caught the turtles where Holmes Run turned into a large swamp and I would see birds like Great Blue Herons. I saw one of those huge birds on my walk this morning (wingspread 6 1/2 feet), which just goes to show that 64 years later I’m still doing the same thing: walking next to the water and spotting turtles and birds. Some things never change.

The Birds of Pandemonium