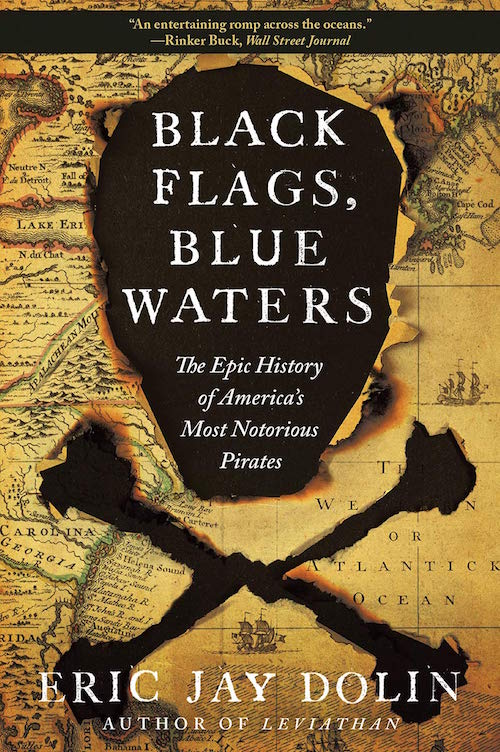 The subtitle of this book says it all: “The Epic History of America’s Most Notorious Pirates.” By focusing on just American pirates, and within a narrow time frame of the so-called “Golden Age of Piracy” (1650s-1730s), author Eric Jay Dolin has created a gripping tale that reveals as much about the American culture of the time as it does about the pirates themselves. In the early parts of this Golden (“Bloody” would be a better adjective) Age, a This is their story, and some of the pirates are familiar, like Blackbeard, but most of them are obscure but fascinating. And there were literally hundreds of pirates, perhaps even thousands, which surprised me. Most of them were the result of unemployment–when wars ended and navies were greatly reduced in size, there weren’t many jobs for seafaring men who had to feed their families.
Piracy began to die out in American waters and the Caribbean when the British sent more ships to fight them, and after the pirate’s nest of Providence Island in the Bahamas was extirpated. Another factor was the fact that the pirates were now attacking American shipping rather than British shipping, thus hurting the economy of the colonies rather that contributing money to them.
Author Dolin depended heavily on Captain Charles Johnson’s 1724 book A General History of the Robberies and Murders of the Most Notorious Pyrates for stories and illustrations in this book, but still its the best history of piracy that I’ve ever read. I highly recommend it. Other outstanding pirate histories are Empire of the Blue Water, by Stephan Talty and Pirate Hunter of the Caribbean, by David Cordingly.