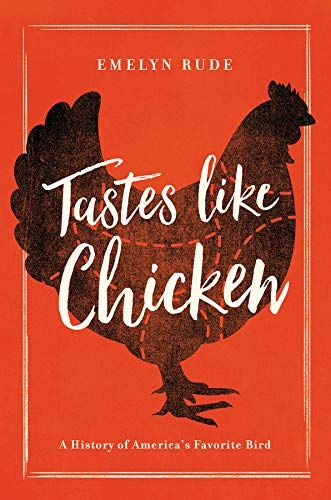 How many chickens did you eat last year? If you’re like most Americans, you consumed about 90 pounds of the bird in 2019, which is approximately the equivalent of 23 whole chickens. This is far more meat than beef, which Americans eat 50 pounds of each year, and just under 50 pounds of pork. All combined, the people of this country gobble down 5.9 million pounds of chicken every hour of every day–or about 8.6 billion birds a year, while the rest of the world eats about 19 billion more chickens. How do I know all these bird-brain factoids ? I’ve been immersed in Tastes Like Chicken, by Emelyn Rude, which is subtitled “A History of America’s Favorite Bird.” The book is part of a growing interest in food history, also called culinary history. I confess to being a part of this nonfiction genre, having written, among other books, Da Vinci’s Kitchen, The Founding Foodies, Precious Cargo, and the forthcoming Chile Peppers: A Global History (University of New Mexico Press, fall, 2020). I love to research and write food history, but have to admit that most of the books in this field are not bestsellers.
The earlier chapters of Rude’s book are more interesting to me than the later ones, which deal with such subjects as the nutritional facts about chicken, the New York “Chicken Wars,” the rise of the Delmarva Peninsula as a chicken-breeding paradise, and the growth of Tyson Foods. The earlier facts about the nation’s fascination with chickens are more amazing than the later ones, and I was particularly interested in the popularity of fried chicken, and how early African American entrepreneurs sold fried chicken to travelers stopping at inns in the South and by 1799, visitors were exclaiming that the best food was made by “Negroes, who are the general chicken merchants.” In Virginia in the 1850s, “The locomotives would pull in and the [black] women would hold their trays of piping hot fried chicken up to the windows, letting passengers pick and choose what part of the bird they wanted–five cents for a back, ten cents for a wing, fifteen cents for a leg or breast.” Historical recipes accompany the text if readers would like to taste as they read. All in all, Tastes Like Chicken is a highly entertaining and interesting book and I recommend it.

The Naked Truth: A Chili Cookoff at the Famous Chicken Ranch Brothel

Review of 1941: The Year Germany Lost the War