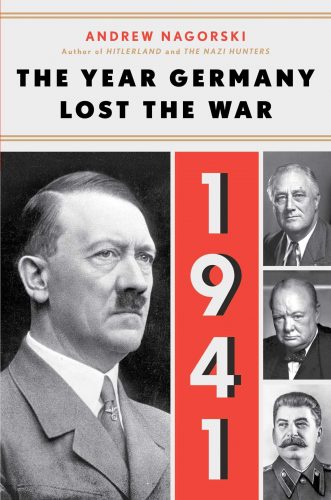 It never ceases to amaze me that World War II historians can approach the same facts from a different angle and still tell an educational and fascinating story. Andrew Nagorski has accomplished such an achievement in this book with the added bonus of revealing an Adolph Hitler that besides being an egomaniac and a mass murderer, had at least one other character flaw: he was stupid.

At he beginning of 1941, Germany had one major enemy yet unconquered: Great Britain; by the end of that year, it had three, with the addition of the United States and Russia. Hitler now had four fronts of the war engaged at the same time: Great Britain, Africa, Russia and the Mediterranean. The U.S. was too far away to be considered a front, but it was an enemy, and a deadly one. What a military genius Hitler was! Taking on the world, critics said.

Nagorski writes: “By late November [of 1941], some of the top German generals were not only convinced they would not be able to complete the drive on Moscow that year; several of them were visibly embittered, no longer in awe of Hitler’s military and political genius. They would soon pay for such heresy.” He also writes, “By the end of 1941, Hitler had taken almost every wrong decision possible.” How and why this stunning turnabout happened is the subject of this fascinating book, and Nagorski writes it extremely well.

“A Field of Ruins;” Review of The Liberation of Paris