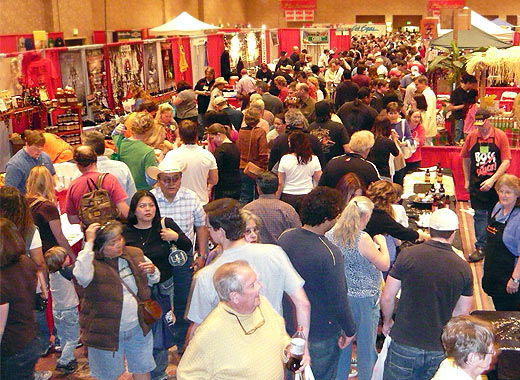 Above: The Crowd at the 2008 Show at Sandia Resort & Casino

There is virtually no way for a show producer to control the amount of alcohol consumed by attendees at a show. We depend upon the servers to take care and cut off the people who are obviously intoxicated, but they are not perfect and accidents happen. The results are inevitably unpleasant. One thing that a food show does not need is projectile vomiting, but it has occurred at our show–back in the early days at the Convention Center. Other alcohol-related incidents we try to avoid are fistfights and people passing out and collapsing on the floor. Calls to 911 to rescue unconscious partiers are rare, fortunately, but they have happened. One reason that the drinks are so expensive at a show is to prevent over-indulgence and we have noticed fewer instances of drunkenness in recent years.

We have had to deal with faked tickets and comps, people sneaking into the shows, and a few cases of outright theft. By switching to four-color complimentary tickets printed on both sides, we have eliminated the faked tickets, but occasionally we have to stop people from hawking real comps outside the show. How do they get the real comps? Well, we give out hundred and hundreds of real comps to exhibitors and sponsors, so some will inevitably fall into the wrong hands. One year a jewelry exhibitor had more than $5,000 worth of silver stolen after hours from a glass case, but the perpetrator was caught and convicted and most of the merchandise was recovered. Thieves forget: our show is held at a casino—there are cameras everywhere except in the rest rooms. Most of the security guards at Sandia are former detectives. And exhibitors should know better than to leave bank bags lying around in plain sight, but then again, people are sometimes careless. For some unknown reason, despite the crowds, we had never had a report of pickpocketing. As far as sneaking into the show goes, try it and see what happens.

The Most Challenging Guest Chef

That would be Chef Paul Prudhomme. I should point out that this happened in the old days when Chef Paul must have weighed 400 pounds or more. He spent most of his time in a wheelchair—he could walk, but not climb steps. So how could we get him on stage? Well, I had to arrange for a Small Mini Mobile Jib Crane with Wheels. He had a special harness, so we attached a line to it and winched him up onto the stage to the applause of a record crowd at the Convention Center. I had to leave the stage area to take care of some emergency, so I missed him making gumbo. Good thing, because he had brought his own propane tanks and proceeded to cook over an huge open flame, which violated the fire regulations. The entire show could have been shut down and the hall evacuated. But we got lucky and fed about 500 people. The show must go on!

Our Most Successful Exhibitor

We make no promises about exhibitors getting wealthy at our shows. We do promise huge crowds and the rest is up to the sales talents of those who taste and sell their products. The saga of Garden Fresh Salsa began when I got a call from Jack Aronson, who owned a small restaurant outside of Detroit. He told me that everyone loved his fresh salsa and he wanted to see if he could market it and sell it. Could he exhibit it for tasting purposes only at our show and judge the response? Of course, I said. This led to a remarkable run for Jack as Garden Fresh became the top fresh salsa sold in the U.S.A. Between 2003 and 2015, Garden Fresh Salsa exhibited at every one of our shows and won an astonishing 258 Scovie Awards. In 2014 Jack turned down a huge offer from Pepsico to buy his company. The reason? They were going to shut down his factory, move production to Virginia, and put 300 people out of work. These were his loyal employees and he couldn’t do that to them. A year later, he did sell the company to Campbell Soup for a quarter of a billion dollars, but they kept his factory open and all his employees. Before he closed the deal, he called me and apologized for not being able to exhibit with us anymore because of the pending sale! It’s because of wonderful people like Jack that we’re still in business after 32 years of show production! Thanks to everyone who has stood with us over the years, from myself, Mary Jane, and Emily.

Three Decades of Heat: Some Memories of the Fiery Foods Show, Part 1