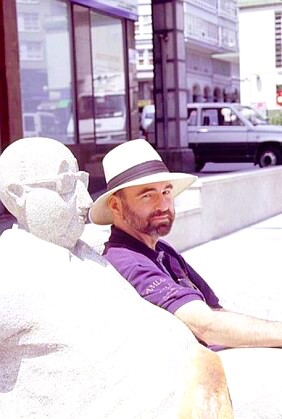 Editor’s Note: During the early days of Chile Pepper magazine, Richard Sterling was one of my best writers. The media called him “The Indiana Jones of Gastronomy.” Recently I received the following email from Richard, who now lives in Battambang, Cambodia. The image above shows Richard in Seville. You can visit Richard’s website here.

So, Dave, how is every little thing in your part of the world? In the pandemic, even though we don’t have the virus here in Battambang, the days here in western Cambodia are so languid and uneventful that I, and many others, lose all track of time. If I were still working, life would have some structure and I would live more by the calendar. I have considered working again, but in the pandemic, classroom hours are limited, and so there are no openings.
So, in order to break the cycle, a few weeks ago I gave a party, a Mexican Fiesta, for 30 people. A Swiss friend of mine owns a small resort hotel. What with tourism in the tank, he has no guests. So he gave me the use of the place, including it’s excellent kitchen. 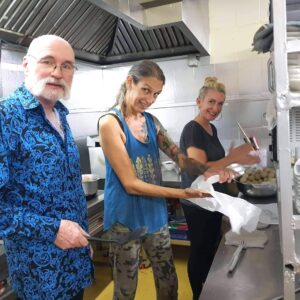 Richard in the kitchen with helpers Kit and Roxanne.

I had to travel to Phnom Penh to get ingredients from a specialty import shop, such as masa harina, chipotle, hominy, etc. Then with the help of two friends who acted as sous chefs, we concocted a fiesta grande. Myself, Kit (U.K.) and Roxanne (CA) made 70 corn tortillas, spicy beef cheeks and shrimp for tacos, a big pot of pozole, curtido, frijoles refritos, chips and salsa fresca. Also six liters of sangria (Okay, I know it’s not exactly Mexican.) and 3 liters of Margarita and a bottomless barrel of beer.
Using YouTube I put together a playlist of 50 Mexican songs, leading off with La Charreada. An Australian friend who is a musician brought his guitar. He had taught himself a few Mexican songs which he performed for us to enthusiastic reception.
Of my 30 guests, 12 were Cambodians, and the rest were expats from around the world: Europe, Asia, Africa, the Americas. Now Cambodians are notoriously picky eaters. Except for pizza and ice cream, they will rarely touch foreign food. So I took the one I thought to be the most adventurous by the hand and led her to the buffet. I showed her how to assemble a taco. I filled her plate with all the other dishes. I drew her a glass of sangria. 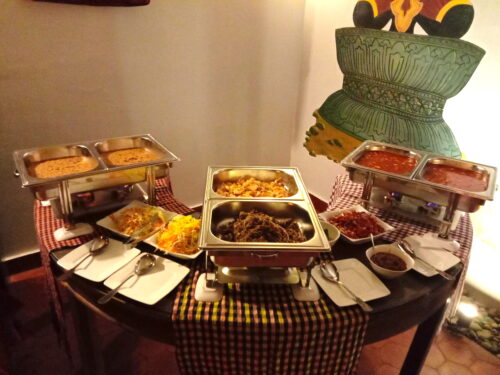 She took a tentative bite of the beef taco. She did not make a bad face. She took a bite of the shrimp taco, and smiled. She tasted everything else, then turned to her skeptical countrymen and women and said something to the effect of , “Hey you guys, this is delicious!” In the end there wasn’t a scrap of food remaining. Your average Cambodian can’t find Mexico on a map and can’t tell you a thing about it. But there are now 12 of them who love Mexican food. There is hope for humanity!
And that’s the news from Battambang,
RS

Kimchi Culture: The Cult of the Cabbage

A Ponga, Some Yellowtails, and Mexican Sashimi