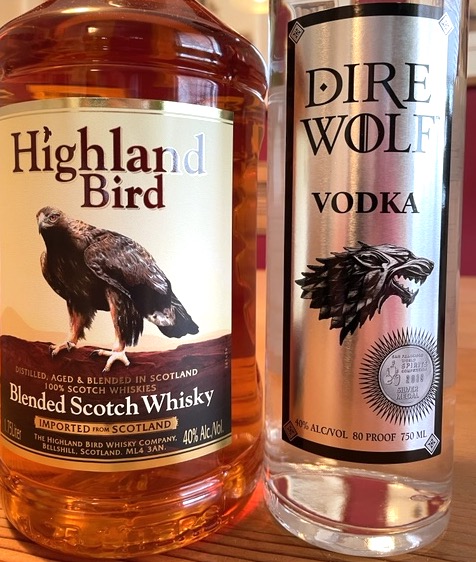 While stocking up today at Total Wine, I noticed that I am attracted to brands featuring fierce creatures, whether extant or extinct. Here, I’m referring to the golden eagle, a worldwide species that’s one of the largest raptors, though not as large as the Philippine monkey-eating eagle or the harpy eagle. The dire wolf is extinct, but it was fearsome in its time, and is one of the most common victims of the La Brea tarpits.  The golden eagle does live in the highlands of many countries, but it is not limited to that zone; in fact, it inhabits all climatic zones, including the desert. And if the bird cannot find a tree to build a nest in, a telephone pole or power pole will do nicely–thanks, humans. There is no archaeological evidence indicating that the dire wolf was any more ferocious or terrible than today’s timber wolf. Here’s an artist’s rendering of a pack of ’em: 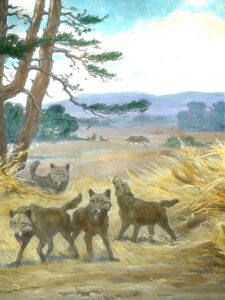 Kinda cute. Incidentally, Highland Bird is distilled and bottled by the Highland Bird Whisky Company in Bellshill, Scotland, and the Dire Wolf has a den at Aztec Spirits in Santa Fe.