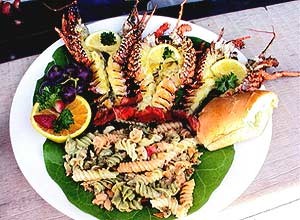 Paul Ross writes on the SuperSite:

“Some say the secret of great barbecue is the sauce,” winked the grizzled old sailor, “but it ain’t so.”
Anticipating my next thought, he continued, “It ain’t the meat neither. Nor the smoke, nor the temperature. None of them things you’ve been told–ha!”
Maybe it was the tropical humidity or the anticipation, but sweat trickled down my cheek as he took time to relight his pipe before concluding a tale that had rendered the normally rowdy waterfront saloon silent.
In a flash, he reached into his pocket and tossed a wrinkled and stained parchment down on the table, motioning me to open it. It was a map or, more properly, a sea chart. Tapping at a tiny spot mid-Caribbean, he leaned over and winked again, confidentially.
“On-GEE-yah?” I attempted in my best half-assed New Mexican Spanish.
“An-GWIL-lah,” he corrected. Sounds like somethin’ Godzilla fought with, don’t it? But it’s a coral isle, just sixteen by three miles. Near St. Martin, it is, so recently, them tourists have ‘discovered’ it. Warm, sunny skies, clear blue water, purty beaches, some trendy restaurants and hotels. But only the natives know its real treasure.” Discover the secret of Anguilla, plus recipes, here.